Jimi Hendrix Is Unrecognizable In This Rare Clip Of Him Performing Back-Up Guitar In 1965! 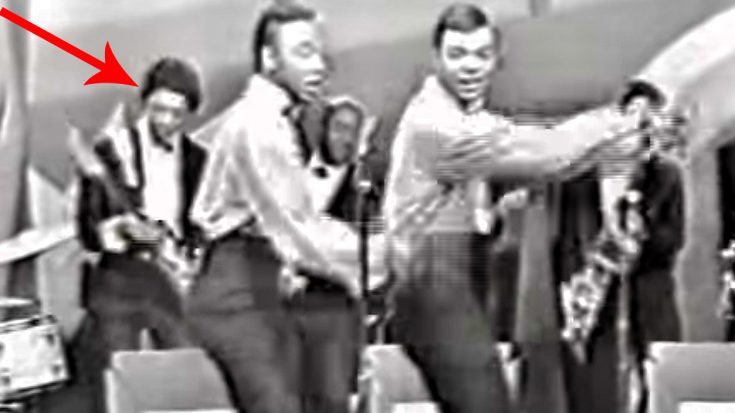 Even Jimi Had to start somewhere!

Before Jimi Hendrix became the greatest guitarist of all-time, was shredding mind-blowing solos and crafting dreamy song lyrics, he started out just like everyone else. He was a back up guitarist for many other legendary artists like Little Richard, Slim Harpo and Wilson Pickett.

If you don’t believe us, well we’ve dug up some rare footage to back it up! Below is footage of Jimi performing with the duo Buddy and Stacy on the late night TV show Night Train. At first you might not recognize Jimi, but if you look closely, you’ll notice him in the background with a small afro and wielding his left-handed guitar. It’s a little weird seeing Jimi play without him shredding, and also strange not seeing him center stage.

Little did people know but this was the birth of a legend, and he was standing in the background! Watch the video down below, and prepare to be amazed!

He was gone too soon but even with his short-lived career, he managed to make a huge mark in rock ‘n roll. He didn’t just have mad axeslinging skills, he was also innovative, creative and imaginative. He raised the bar in guitar playing and paved the way for other shredders to think outside the box. He was never one to conform to rules.

Jimi Hendrix left everyone in the dust. You can still feel his influence nowadays and that speaks volumes about his talent. There will never be another one like him.