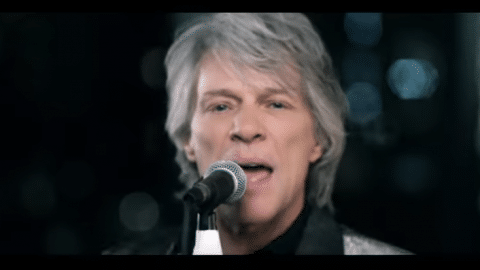 The cover for Bon Jovi’s “2020” album features the rocker wearing sunglasses and jacket. It may not seem much from the get-go but there’s an interesting backstory why he chose this particular image. It was actually inspired by a 1962 photo of John F. Kennedy.

In a statement posted on his website, Jon Bon Jovi wrote: “The inspiration for the cover of Bon Jovi 2020 is a photo of John F. Kennedy, taken by Michael Ochs in August of 1962. It pictures the president reflecting both literally and figuratively upon a crowd in California. I saw this photo and wondered what the president was thinking. Since there are so many socially conscious songs on the record and my admiration of the photo of JFK , I asked photographer Clay McBride to capture it as the cover of Bon Jovi 2020.”

Bon Jovi: 2020 is the follow-up to 2016’s This House Is Not for Sale and it’s slated for release on May 15, 2020. Compared to its predecessor, JBJ revealed that 2020 will feature more “socially conscious” themes such as politics, gun control, and the plight of veterans suffering from PTSD. It also includes a track about parenthood and family. JBJ shared that “It encompasses life, love, and loss.”