Jethro Tull Go Off The Rails For “Locomotive Breath” 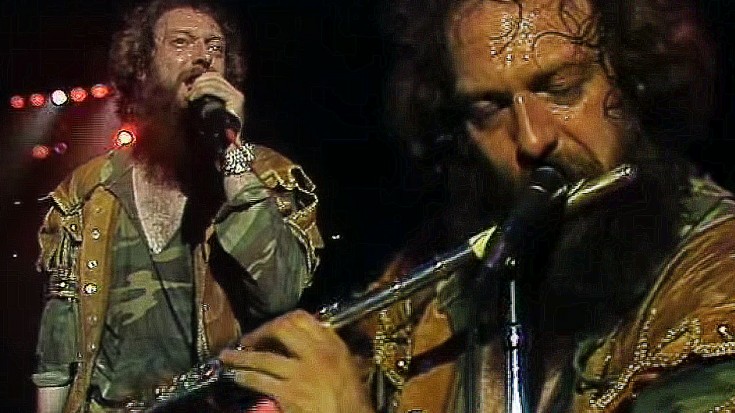 Off The Rails With Jethro Tull

Featured on Jethro Tull’s 1971 album Aqualung, ‘Locomotive Breath’ is as known for its intricate flute solo as it is for its social commentary on a world quickly headed off the rails and when performed live, singer and flautist Ian Anderson is a human dynamo that embodies the overall feeling of being completely out of control – in the best possible way, of course!

“When I wrote it, I wasn’t deliberately setting out to write a piece of music on a particular subject. But it evolved during the writing process into being not terribly specific, but about the issues of overcrowding – the rather claustrophobic feel of a lot of people in a limited space.” – Frontman Ian Anderson

Filmed in 1982, this exclusive concert footage features Jethro Tull performing ‘Locomotive Breath’ and to say that it’s a wild ride is an understatement; much like an actual locomotive, the performance starts off slowly with its long, bluesy piano introduction and builds gradually with a blistering guitar solo by Jethro Tull guitarist Martin Barre before reaching its pinnacle as Ian Anderson appears onstage, looking like a man out of time with a story to tell.

If this is what a train going off the tracks sounds like, then sign us up! Jethro Tull, more so than any other progressive rock band, had a tremendous gift for turning their songs into epic stories that when performed live, appealed to you on a visual level; while they weren’t big for flashy displays, Ian’s stage presence is what sells songs like ‘Locomotive Breath,’ and you can’t deny how much fun there is to be had with a band like Jethro Tull!