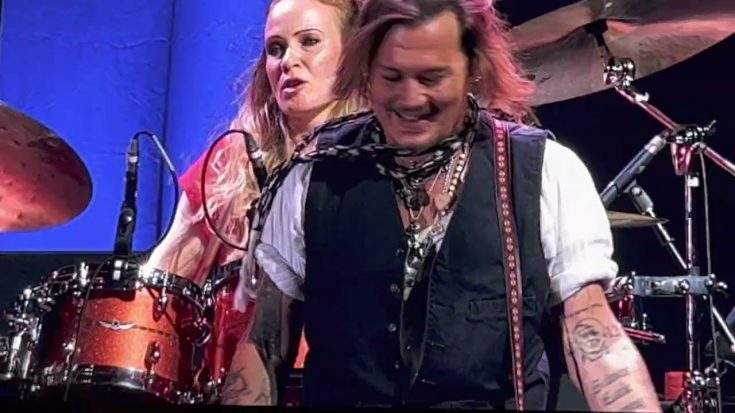 Johnny Depp and Jeff Beck have been recently accused of stealing lyrics from an imprisoned man on their new collaborative album, 18.

Lyrics of the song “Sad Motherfuckin’ Parade,” were allegedly lifted from “Hobo Ben,” an old toast or form of Black folk poetry. It was delivered by the late Slim Wilson, who’s a gambler, pimp, robber and a murderer.

The convict was doing time in the Missouri State Penitentiary for armed robbery in 1964 when he met folklorist Bruce Jackson, who featured Wilson’s work in his 1974 book about toasts titled Get Your Ass in the Water and Swim Like Me and a 1976 album of the same name.

“Hobo Ben” includes coarse lines, “Ladies of culture and beauty so refined, is there one among you that would grant me wine? / I’m raggedy I know, but I have no stink / and God bless the lady that’ll buy me a drink,” and “Heavy-hipted Hattie turned to Nadine with a laugh / and said, ‘What that funky motherfucker really need, child, is a bath.'”

Several of these lines appear verbatim in “Sad Motherfuckin’ Parade,” such as “I’m raggedy, I know, but I have no stink / God bless a lady that’ll buy me a drink,” and “What that funky motherfucker really needs, child, is a bath.” The song, however, is credited solely to Depp and Beck, with no mention of Wilson, Jackson, and the book. Jackson said:

“Everything else is from Slim’s performance in my book. I’ve never encountered anything like this. I’ve been publishing stuff for 50 years, and this is the first time anybody has just ripped something off and put his own name on it.”

A spokesperson for the 18 album team said:

“We are reviewing the inquiry relating to the song ‘Sad Motherfuckin’ Parade’ on the 18 album by Jeff Beck and Johnny Depp. If appropriate, additional copyright credits will be added to all forms of the album.”

Even though the lyrics to “Sad Motherfuckin’ Parade” appear to be directly lifted from “Hobo Ben,” a lawsuit would be far from a slam dunk due to the unclear origins and authorship of the toast. They’re typically passed down orally through generations, and Wilson said he learned “Hobo Ben” from his father.

Jackson may only be able to lay claim to “Hobo Ben,” since he owns a copyright to the transcriptions of the toasts recorded for Get Your Ass in the Water and Swim Like Me. Jackson seems less concerned about his work getting swiped than he is about Wilson getting properly credited. He said in a statement:

“If Johnny Depp is making a lot of money on it. Should it go to him, or should it go to someplace that helps the people who produced this culture?”