January 10, 2016: David Bowie Dies At 69, And His Death Sends Shockwaves Across The World 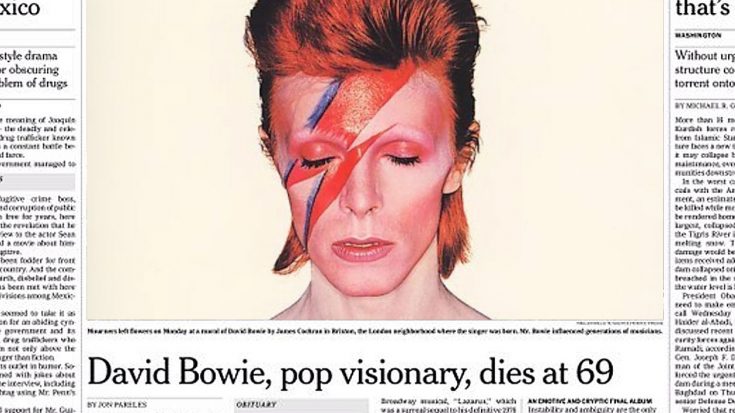 Bowie’s Death, One Year On

David Bowie reinvented himself at every turn. From one year to the next, you never saw the same incarnation twice; Ziggy Stardust, Aladdin Sane, The Thin White Duke, Bowie’s ability to die and come back reborn as something even more fantastic and larger than life than before was his greatest asset as an entertainer and icon, and perhaps the thing that made his January 10, 2016 death that much more difficult to swallow. How dare an illness like that take away one of rock and roll’s best and brightest minds when the world needed it most, rob us of what little color and magic we had left?

Bowie’s death at the age of 69 came as a shock, to say the least; no one outside of a select few friends and family knew he was sick and those who did know of his 18-month battle with liver cancer were sure he’d beat it. The news trickled in late that night, disbelief giving way to devastation as Bowie’s family confirmed the news via Facebook. Tributes poured in from across the world, stunned fans and friends and critics joining hands and hitting the streets in search of a way to vent their grief and pay tribute to the man who fell to earth.

What sticks out in our minds the most, though, isn’t the way David died – it’s the way he lived in the days, weeks, and months leading up to his death. He could have spent his final days mourning the loss of a future he’d never have, grandchildren he’d never see and a wife from whom he’d be parted for the first time in two decades but instead, completed work on his 25th and final studio album, Blackstar, as close to a goodbye as we’d ever get and a massive musical undertaking that saw him fearlessly plumb the depths of life, love, death, and rebirth one last time.

One year on, there’s still a collective disbelief that David is gone but it has nothing to do with feeling an absence and everything to do with the indelible mark he left on the world. How could he possibly be gone if we’re still finding surprises on Blackstar, still talking about him at every turn and seeing him on our televisions and clothing stores and social media accounts? I suppose that’s the magic of Bowie at work; in life he was whatever we needed him to be whenever we needed it and in death, it’s comforting to know that that much hasn’t changed. If that’s not a legacy to hang your hat on, I don’t know what is.