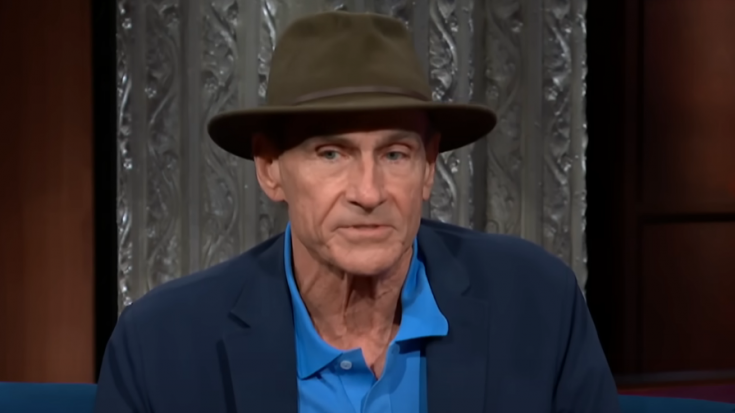 The legendary James Taylor shares his perspective about how he approaches his live performances.

In his recent guest appearance on The Late Show with Stephen Colbert, Taylor said about playing his songs:

“With songs that are standards like these, you know the song. In my case, you’ve played it for many years, you have the arrangement of it. You go in with a very good idea of what it is and what it should sound like, and how you want to change it to make it your own. Typically, I write my own stuff; so when I go into the studio and perform something and lay it down, that’s the first time—it’s never played for people.

“After you play something about 20 times, it sort of finds it way. It gets sort of seated. I often thought that would be a good idea, but I’ve never really gotten around to doing it.”

“I understand what the inspiration for that is, what the motivation is to change it and to make it new. But also, I’m very aware that an audience—if they want to hear the song, they want to hear it as they recognize it. They don’t wanna hear some version.”

Meanwhile, Taylor’s son Henry is joining him on tour, he shared:

“It felt so easy and familiar, obviously. I think he’s got a feel for it. I’ve toured, actually, with three of my children at various points and it’s a wonderful thing. Henry just, in particular, he says he feels anxiety. He feels nerves beforehand, but you wouldn’t know that. I’ve often said that 90% of show business is how you look when you’re nervous. If you look good, you’re in good shape.”

Doing music for years, Taylor revealed that he still gets anxiety when performing, he added:

“I’m always nervous when I go on, more at the beginning of a tour. Once you get into a groove, your groove has to last for years.