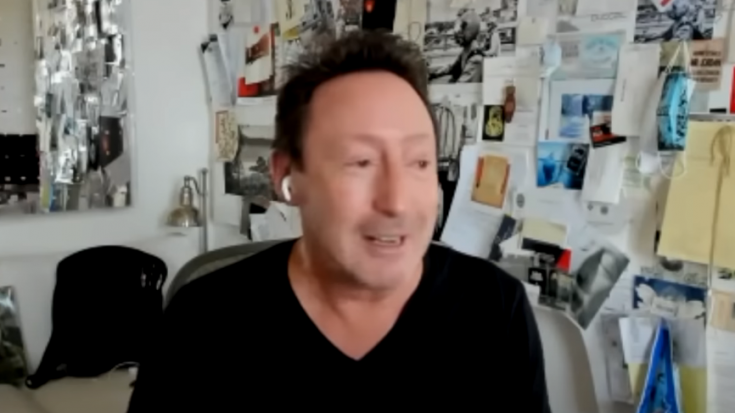 Julian Lennon talked about his new album Jude on the Word In Your Ear podcast.

He shared about the name of the record:

“This has been a real journey from songs from 30 years ago to present day, and the fact that most of the context and emotion and songwriting in them were the same as they were 30 years ago. Whether it’s about the environment and humanitarian issues in a subtle way that we’re still dealing with the same crap, and love and loneliness and hope and purpose and dreams. So it ran the gamut and it all made sense and so I said, ‘Alright, let’s do it.’ And I thought the name Jude, especially–I mean, there’s a few reasons why I called it Jude. I felt I’d finally become Jude in many respects.”

Talking about where Jude came from, Paul McCartney initially wrote the Beatles classic as “Hey Jules” in 1968 to comfort five-year-old Julian following his parents’ separation at that time. But how he referred to himself as Jude, he said:

“It was in 2020 just before we all got locked in a cage that I finally decided to actually change my name by deed poll, because originally, my name was John Charles Julian Lennon. And the crap that I had to deal with when travelling and security companies and whenever you had to present yourself especially on like boarding passes–just an example–you know, they only use your first name. And so it would always be John Lennon, John Lennon, John Lennon, and John Lennon.

“So I became quite fearful about those and anxious about those scenarios because there would always be wise cracks or jokes or most of the time, people didn’t even recognize me so it became really uncomfortable over the years. I’d always been known as Julian, and I never felt like I was me. So finally, I just decided in 2020, I want to be me now. This is it, you know. It’s time for a change.”

“I wanted to respect the legacy and the wishes of my parents. All I did was switch the John and Julian so I’m Julian Charles Johnson. It’s as simple as that, but for me, it’s a whole ‘nother world., it really is.”

Stream the full episode on the video below.