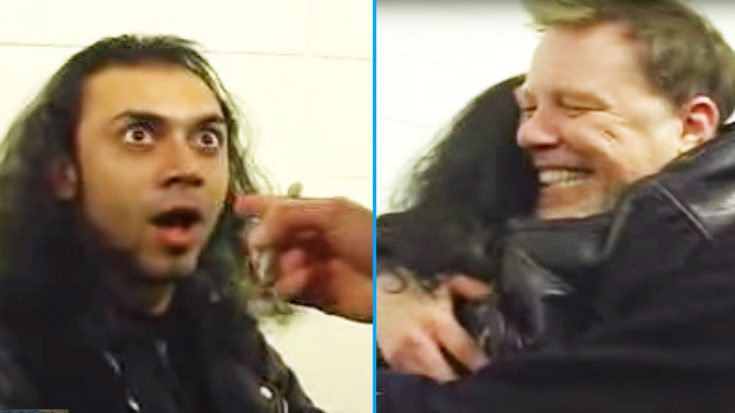 Always knew James was the man!

The members of Metallica have always come off as tough, gritty and straight badasses. But there’s no doubt , that on the inside, they’re some of the nicest people in rock n’ roll. Take for example this amazing moment between a fan and frontman James Hetfield after a show. Hetfield exits the stage with a roadie, and has one of his signature guitars in a nice case. He makes his way down the tunnel backstage, and spots a fan hanging out with his friends. Hetfield stops, pulls out the guitar, and hands it to the fan! He then proceeds to sign it, and take a picture with the fan and his friends!

The first instrument James Hetfield learned to play was not the guitar; it was the piano at age nine!

The look on the fan’s face is PRICELESS! He is utterly stunned at the gesture, and begins to cry during the end of the video. The fan’s name is Tony, and at the time, he played for a heavy metal band from Baghdad named Acrassicauda! Imagine how he felt when James handed him that guitar!? Not only that, James encouraged him to use it and keep making music, explicitly stating, “there’s still a lot of great riffs in that guitar!”

What a great moment! check it out for yourself down below!