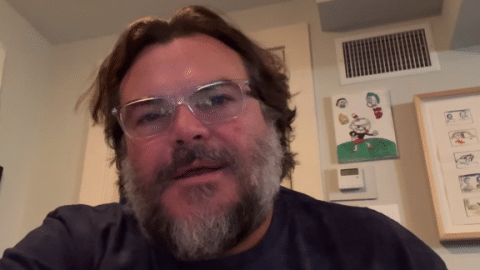 The actor and part of the rock duo Tenacious D, Jack Black, filmed a video for the students at Palmerston North Intermediate Normal School in New Zealand. The message of the clip was all about wishing the kids well on their staged production of the 2003 hit film School of Rock.

Black starred in the film and portrayed the role of Dewey Finn, who is a struggling rocker that masquerades as a teacher and then assembles an all-star group of school-age talent to compete in a battle of the bands. It’s more than just about rock n’ roll, but is a charming tale of tribulation and triumph.

According to a news report, this video greeting was made possible by a parent of one of the students who “had a connection” to Black. The video was then shared on the school’s Facebook page. In the clip, Black can be heard saying:

“Palmerston! North Intermediate Normal! It’s me, Jack Black. I heard you were doing School of Rock.”

“Are you doing School of Rock?!

He continues after a laugh:

“Hey, you rule the school and you rock the block. And I just wanted to wish you luck. I wanted to send you good vibes and rock and roll spirit. Go get it! And don’t forget, [sings] ‘There’s no way you can stop the School of Rock!’ Rock ‘n’ roll, much love.”

The current Principal of the school, Hamish Ruawai, admitted that he himself was surprised by this, saying:

“We surprised our students by playing the video of him to them prior to opening night, just before they went in. They were stunned, the adults were stunned and the feedback we’ve had on social media has been amazing.

“There are some strong messages in the film about following your passion and resilience, which is one of our school’s values and it fits in really nicely.”

Ruawai shared about the school’s plans to perform a musical adaptation of the film, “when we see Palmerston North being mentioned along with a famous actor it makes us feel really wonderful, really blessed.”