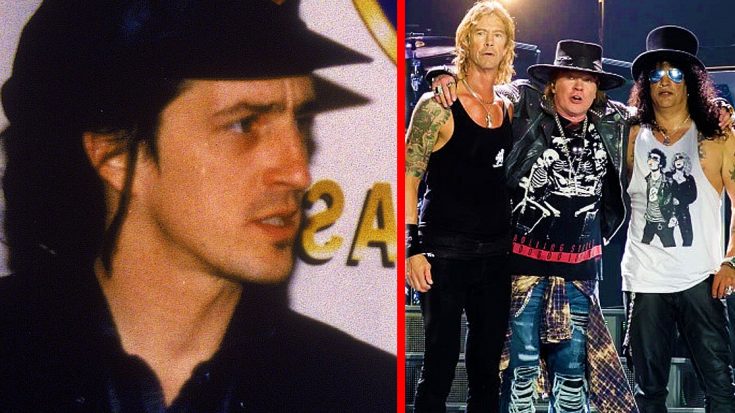 If, like us, you were part of the “Where’s Izzy?” camp when it came to Guns N’ Roses’ highly anticipated reunion tour, don’t worry: the man himself just debunked the rumors surrounding his absence from this summer’s festivities and in all honesty, we really don’t know what to think.

Let’s back up – last weekend saw Axl Rose and Duff McKagan in their first public interview since news of the band’s reunion and when asked about the noticeable absence of Izzy Stradlin and Steven Adler (who came out for a few shows during the middle of the tour), Axl attempted to sum up the guitarist’s absence by saying, “I don’t really know what to say about Izzy. It’s like you could have a conversation and think it’s one way and the next day it’s another way; and I’m not trying to take any shots at Izzy. It’s just his thing is kind of his thing, whatever that is.”

Izzy, however, sees things a different way; this morning, the 54-year-old guitarist lashed out at his former bandmates on Twitter, calling BS on Axl and Duff’s claims that they didn’t know why he kept refusing to participate in the reunion and revealing the core cause of his refusal to join up: money.

Bullshit
They didn’t want to split the loot equally . Simple as that . Moving right along……..

Ouch – did it all really boil down to money and Axl, Duff, and Slash not wanting to share things equally? No word from Axl and the guys yet either confirming or denying Izzy’s claims, but judging by Izzy’s “Simple as that, moving right along,” the matter is done and dusted as far as he’s concerned. If true, it’s a shame that some things haven’t changed in the last two decades and we hope that the guys find some resolution that will allow Izzy to rejoin Guns N’ Roses without feeling cheated!