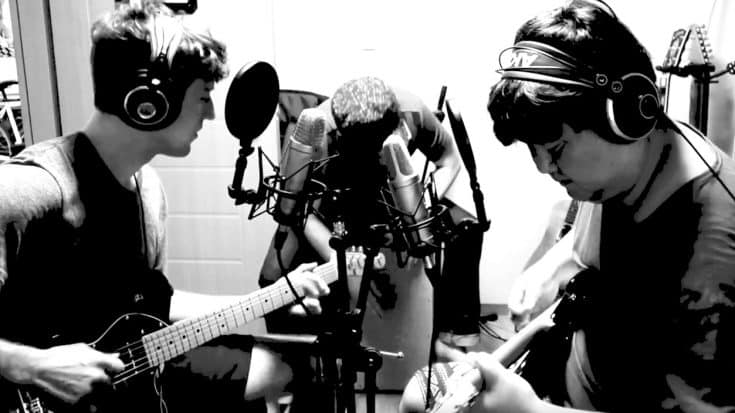 Y’all, This Is Just Way Too Much Fun

It never ceases to make us smile when we see youngsters pick up instruments and jam the classics with their friends, abandoning Guitar Hero for real life guitar heroes who play real guitars; there’s an innocence in that that takes us back to being young ourselves and spending long hours imitating stuff we heard on our favorite albums, and it gives us hope for the future in a world where most young people would rather play Guitar Hero than learn to play an actual guitar. That being said, the young men you’re about to see definitely call forth that spirit of youth and good old fashioned rock and roll as they jam Lynyrd Skynyrd’s iconic “Gimme Three Steps,” and we mean it when we say that these kids are the real deal!

Fun Fact: “Gimme Three Steps” is one of the few songs Lynyrd Skynyrd released as a single.

Crammed into someone’s bedroom with two guitars, a few mics and a cajon box for their drummer, the trio – rounded out by singer Scott Hildebrand, his accompanist Jay and special guest Youshin Ko rocking the cajon box – these guys brought an ear to ear grin to our faces as we watched them jam “Gimme Three Steps,” just three kids getting lost in some good old fashioned Southern rock and having a great time doing it.

Their sound manages to be both slick and laid back while at the same time capturing that sense of urgency given Ronnie Van Zant’s dramatic (and hilarious) recounting of his incident with a blonde woman named Linda Lou at a local watering hole, thanks to Youshin Ko who does a fantastic job of keeping the rhythm nailed down tight while Scott and Jay trade licks like it’s something they’ve been doing for years. It’s been awhile since we’ve had this much fun watching a cover but believe us when we say it was absolutely worth the wait; y’all, check these boys out – you won’t be disappointed!