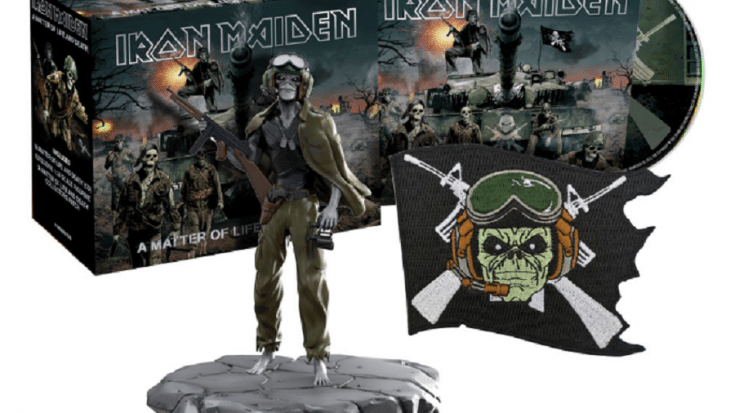 With A Limited Edition Box Set

Iron Maiden just announced the final set of their Studio Collection Remastered series. This fourth installment will feature 2003’s Dance Of Death, 2006’s A Matter Of Life And Death, 2010’s The Final Frontier and 2015’s The Book Of Souls. Launching on November 22nd, the A Matter Of Life And Death CD will be available in a specially artworked box along with a 1:24 scale Eddie figurine and exclusive patch. You can pre-order on the band’s website.

The first installment came out on November 2018, followed by another four albums released on March, and the third set last July.

A few days ago, Iron Maiden received the Visitors Of Honour accolade from the Argentine National Congress. The ceremony was held a day before their massively successful show at the Velez Sarsfield Stadium in Buenos Aires. Speaking at the Chamber Of Deputies in the city, frontman Bruce Dickinson said: “We love music, we love Argentina, we love your food, we love your soccer players – except maybe one! We love your rugby because I’m a big fan of rugby – I’m a big fan of the Pumas.

“There is so much that connects us that is so much more important than anything that might separate us, and heavy metal, music and Iron Maiden is one thing we can all agree on and I think we should celebrate that. We have a sold out show in Buenos Aires, which is a shame because we want to play to bigger people and more places in Argentina and I look forward to coming back here again – and we’re going to play somewhere, maybe River Plate stadium next time.

“Thank you for giving us this fantastic honour. My heart is with you in Argentina.”