In Just 1 Take, Filmmaker Catches Jimi Hendrix Playing Incredible 12-String Acoustic Jam Like No One Else 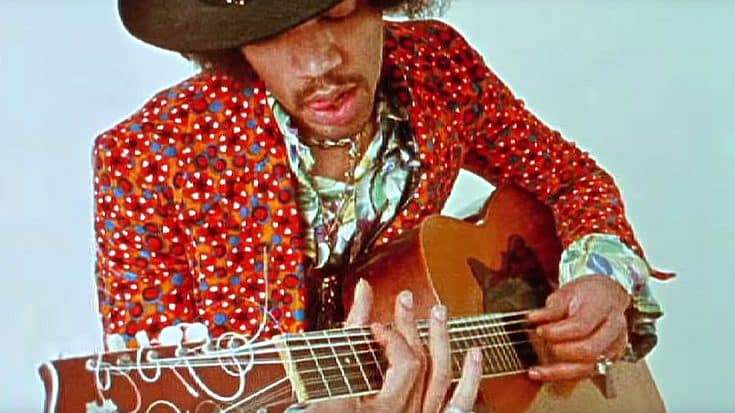 Check Out Those Hands!

For as much music as Jimi Hendrix wrote and released before his death at the age of 27, there’s remarkably little footage of the late legend – which makes what you’re about to see even more incredible.

Seen here in brilliant color playing a 12-string acoustic guitar strung upside down to accommodate his left handed playing style, Jimi jams the then unrecorded “Hear My Train A-Comin'” to the delight of filmmaker Peter Neal, who caught one of the most iconic moments of Jimi’s career on camera for his 1967 film Experience – the first film ever made about Jimi and the only one released during his lifetime.

Peter Neal On The Iconic Moment Caught On Film:

“Just before we left we asked Jimi if he would mind playing some acoustic blues. We’d decided to ask him to do that beforehand and since I had this 12-string guitar, I took it along thinking it would be more interesting for him than an ordinary 6 string.

I noticed how Jimi kept looking at it and then he asked me if he could play it. I said that I’d hoped he would, so he picked it up and launched into that number. We didn’t have much film left at that point, and so I told him that he’d have to do it in one take but it was just one of those magic moments that happen sometimes.”

Running at just under 5 minutes, the entire performance was done in one shot as Neal was running out of film and as the only footage in existence of Jimi playing an acoustic guitar instead of his usual Fender Stratocasters, this is a virtual gold mine as we get a glimpse into a rarely seen side of Jimi Hendrix’s talent. We’ve seen this footage before, but there’s always been something about seeing Jimi up close and in full color during a quiet moment that tugs a little at the ol’ heartstrings and makes it impossible to look away for even a moment. Give it a watch – we’re sure you’ll walk away feeling the same way.