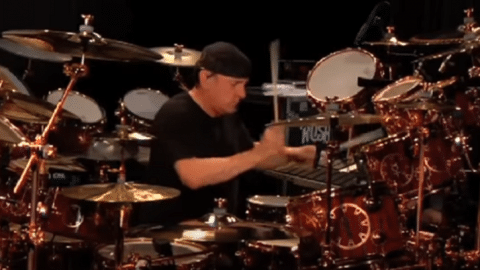 Neil Peart’s more than a legendary sticksman. Sure, his wild skills behind the kit remain unmatched but when he joined Rush, he didn’t just sign up to be their drummer – he also took over the songwriting duties. Geddy Lee may have written most of the lyrics from Rush’s first LP but he wasn’t actually interested in the process. Peart was only too happy to be their primary lyricist and it’s clear that he thoroughly enjoyed writing. In fact, he penned seven nonfiction books.

And as a tribute to the legend we lost early this year, here are some of his best lyrics.

Peart was interested in Greek Mythology which is why some of the lyrics here allude to Icarus.

“Lessons taught, but never learned
All around us, anger burns
Guide the future by the past
Long ago, the mould was cast”

This became a fan favorite and Rush often performed it as an opening number for their concerts.

Like “Resist,” this one references Oscar Wilde’s play titled “Lady Windermere’s Fan.” Even Peart admitted that he’d get emotional whenever they played this track.

“The measure of a life is a measure of love and respect
So hard to earn, so easily burned”

It concluded Rush’s final studio album and what a glorious way of wrapping it all up. It was actually hard to pick just a few verses because the all the lyrics are so well-written.