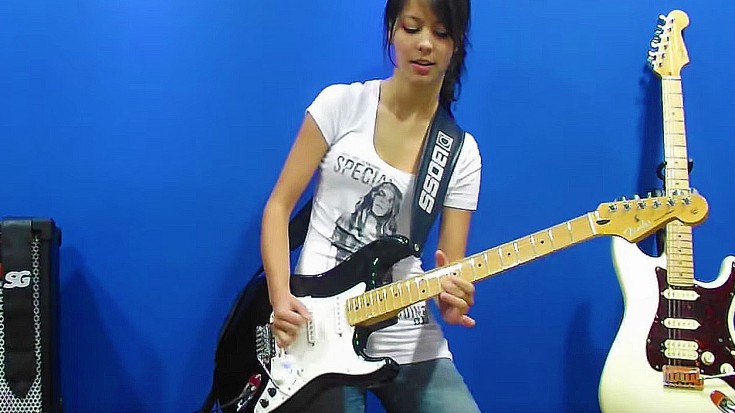 Sound Of The Drums, Beating In My Heart!

This is a killer cover by Juliana Vieira! You need to check out her Youtube channel if you haven’t already.

“Thunderstruck” was written by Angus Young and Malcolm Young. It was released on September 10, 1990 as the lead single for AC/DC’s eleventh internationally released studio album “The Razors Edge.” It reached number 5 on the US Billboard Hot Mainstream Rock Tracks and has been a staple in the band’s live repertoire.

Angus Young stated in the liner notes of the 2003 re-release of The Razors Edge:

“It started off from a little trick I had on guitar. I played it to Mal and he said ‘Oh, I’ve got a good rhythm idea that will sit well in the back.’ We built the song up from that. We fiddled about with it for a few months before everything fell into place. Lyrically, it was really just a case of finding a good title … We came up with this thunder thing and it seemed to have a good ring to it. AC/DC = Power. That’s the basic idea.”

This was also the track they performed to open Coachella 2015. Though it was their first concert in about six years, they sure didn’t miss a beat! That was one for the books! Since this is available for digital download, it has sold over one million copies. Talk about an enduring song!

The video which accompanied the single was filmed at London’s Brixton Academy on 17 August 1990. The audience members were given free T-shirts with the words ‘AC/DC – I was Thunderstruck’ on the front and the date on the back, and these T-shirts were worn by the entire audience throughout the filming of the video.

Brazilian guitarist Juliana Vieira, with over 4 million hits on her YouTube channel, covers this AC/DC classic and she totally nails it! Pure awesomeness!