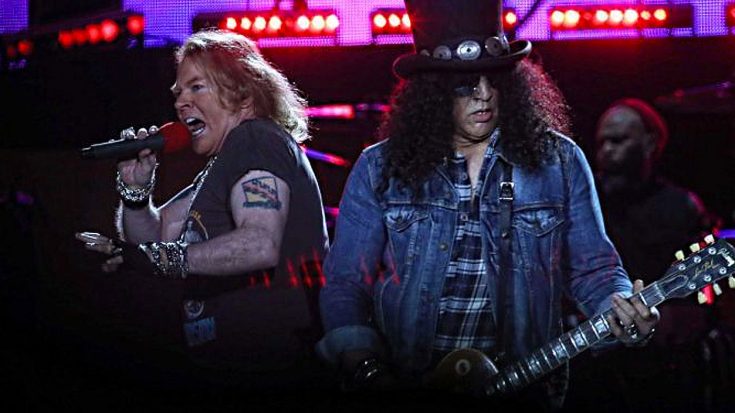 Guns N’ Roses have been on a pretty good run lately. For the past year they’ve not only successfully knocked out leg after leg of their Not In This Lifetime Tour, they’ve shown up on time and ready to rock harder than the night before – which makes their one off night of the entire tour forgivable, not to mention pretty damn funny. After two back to back shows in Sydney, Australia the boys wound up in Melbourne on Monday night where they were an hour late to the stage for reasons unknown and then to add insult to injury, longtime Guns N’ Roses tech McBob pulled a serious This Is Spinal Tap and addressed the city by the wrong name, yelling ‘Sydney!’ moments before the band was due to walk onstage.

Melbourne!
Accidentally after 30 years McBob made an error, we’re truly sorry. Thank you for coming out tonight!

Melbourne, thank you for an awesome fucking evening! Apologies for the Spinal Tap intro! But, we had a great fucking time tonight! Cheers!

The faux pas was met with booing from the crowd and laughter from fans who recall the famous scene from This Is Spinal Tap where Spinal Tap have no idea where they are and roam around backstage yelling, “Hello, Cleveland!”. Guns N’ Roses apologized, and stressed that McBob has gone 30 years without making a mistake – a mistake compounded by the fact that McBob and his family are actually from Melbourne.

All in all, I’m going to call this one a wash; everyone makes mistakes, the fans got a killer show, and Guns N’ Roses seem genuinely sorry. Plus, who doesn’t love an excuse to watch that now iconic scene from This Is Spinal Tap and scream, “Hello, Cleveland!”?