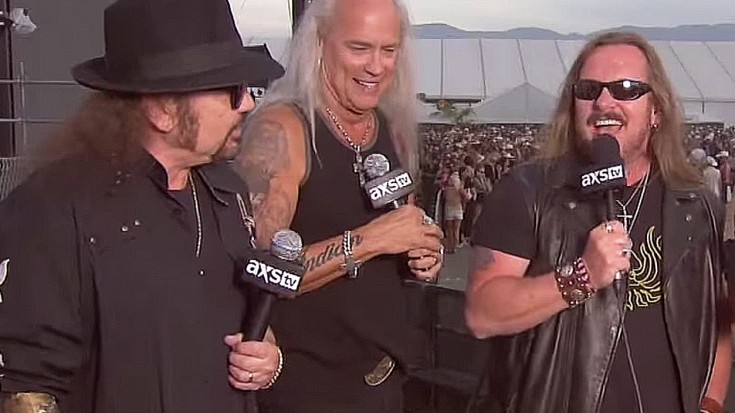 There’s nothing cooler than seeing a band get genuine pleasure out of watching their fans have a great time at their concerts – even if it means standing back and letting the fan be the star of the show for a second! In 2014, Southern rock royalty Lynyrd Skynyrd made their first ever appearance at California’s country music festival Stagecoach and were gracious enough to stop in and chat with AXS TV for an interview that proved to be really enlightening and really, really funny as Rickey Medlocke, Gary Rossington and Johnny Van Zant talked everything from Lynyrd Skynyrd’s country roots to playing European metal festivals.

The really hilarious moment comes towards the end of the interview when the guys are asked to reveal the craziest thing a fan’s ever done in the band’s presence onstage; in true Lynyrd Skynyrd fashion, the answer reflected their fantastic sense of humor and the love they have for their fans as Johnny recalled an incident at a 2013 show in San Francisco:

“We’ve had people jumpin’ up onstage, but we had a girl in San Francisco last year who did cartwheels across the stage.”

Wait, what? We wonder what song it was – our money’s on “Gimme Three Steps,” that song always gets a crowd goin’! According to Johnny, the incident was cute, and looking back he says that it was “cute” and that cartwheel girl “had a blast,” but judging from this interview, the guys had just as much fun as she did, if not more.

In fact, check out their reaction to the whole affair and much, much more as Johnny tells the story in between laughs – somehow it’s even funnier than the actual incident!