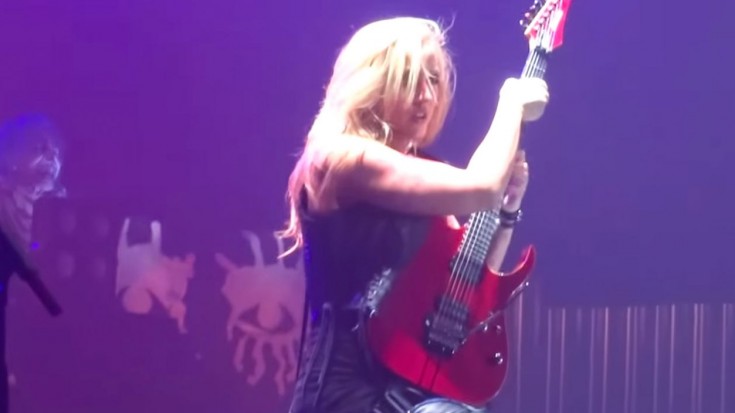 We loved Nita Strauss in the tribute band The Iron Maidens but when she replaced Orianthi in the Alice Cooper band, we loved her so much more. Guitar World had it right when she took the top spot in their list of “10 Female Guitarists You Should Know.” This rocker chick has played pretty much anything from classic funk to deathcore. Just take a look at this incredible, spine-tingling solo during one of their shows at Montgomery.

Man, she sure knows how to show off. She looks and sounds good. She doesn’t just rock, she rocks hard. Oh and if you’re bothered by the stuff you see on her forearm, it’s all makeup. I mean, she’s playing for Alice Cooper — what did you expect? Lol. Check out what she said during her interview in The Rolling Stone magazine.

“There are definitely more guitar solos in rock and metal again,” she says. “So I’m hoping it makes a comeback.”

We hope so too, Nita.

Nita Strauss has come a long way from performing with a tribute group. She has already released a solo album and she even has her own signature model guitar from Ibanez! And she’s still touring with Alice Cooper too. We don’t know about you but this girl is definitely living her dreams.

“The thing that’s been most exciting for me in recent years is seeing this wave of amazing female guitarists coming out and seeing young girls picking up a guitar for the first time… There are so many great female role-models out there, and it’s exciting for me to play a part in whatever small way I can to try to inspire the next generation of players.” – Nita Strauss

She knows how to blow us away. Her skills are no joke either.