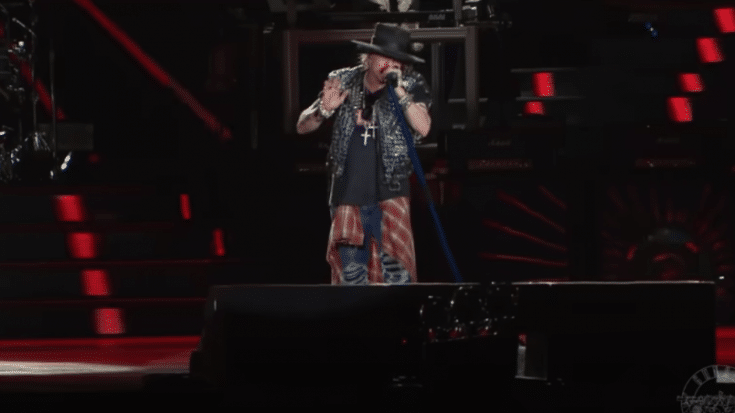 Guns N’ Roses performed their new song “Hard Skool” live for the first time on September 26 at a gig at Royal Farms Arena in Baltimore, Maryland. “This is something about lower education,” frontman Axl Rose told the crowd before he launched into the track.

“Hard Skool” was recorded during the sessions for 2008’s Chinese Democracy. Days after releasing the official audio of the song, the band announced a new four-track EP of the same name, out on February 25. It marked the first record from Axl Rose, Slash and Duff McKagan after 28 years – the last record that featured the trio was 1993’s The Spaghetti Incident?. The EP also includes “Absurd”, along with live renditions of “Don’t Cry” and “You’re Crazy.”

It was in 2019 when McKagan first revealed that they were working on a new studio effort.

“There’s never been a direct schedule on how we do things,” he told Trunk Nation Radio. “I’ve heard some magnificent stuff that Axl has, really cool stuff he’s been working on. So I’m excited about the possibilities of that, of course.”

“The album is real,” he continued. “But the fun part and the cool part about Guns N’ Roses is we don’t really talk about it. What happens next just happens.”