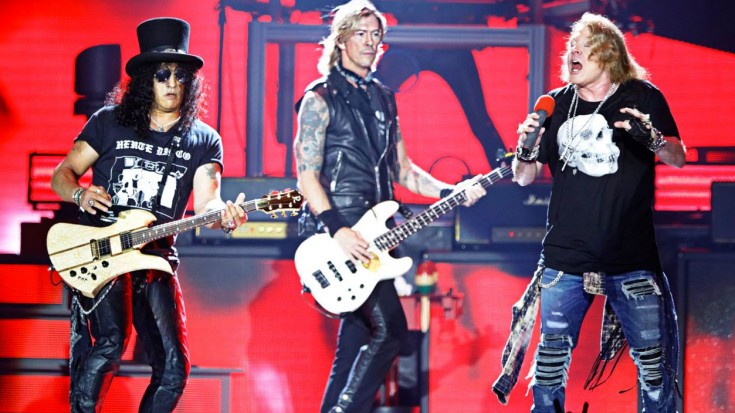 Not In This Lifetime, Night One

In a year fraught with horrible news for the rock world, we got our silver lining last night when rock’s prodigal sons officially reunited for the tour their lead singer, when asked the likelihood of it ever happening, said would never happen – at least “not in this lifetime”. That’s right, folks – Guns N’ Roses came roaring back last night on the first night of their highly anticipated Not In This Lifetime Tour, kicking things off in style last night as they began the first of 30+ tour dates at Detroit’s packed Ford Field last night.

Sure, the first few shows earlier this year were great – the surprise show at The Troubadour, Coachella and a handful of dates in Vegas – but with Axl Rose fresh off of his stint as AC/DC’s interim lead singer on their Rock Or Bust Tour and finally healed after being sidelined for weeks with a broken foot, Guns N’ Roses have never looked or sounded better and judging by the overwhelmingly positive response from the crowd last night, fans agree!

The band hit the ground running by showing up on time – two minutes early, in fact! – and got the party started with “It’s So Easy” before running through the classics we never thought we’d hear them play again, but the greatest moment of the evening came when Slash hit the stage alone to reprise his famous Godfather guitar solo that leads into “Sweet Child O’ Mine” and no doubt taking fans down memory lane and back to the last time we ever saw this moment.

The fans had a great time, but the real joy was seeing how much fun the guys were having – two decades may have passed, but with the chemistry shared onstage last night, you’d never know it! If you weren’t able to snag tickets to last night’s show, never fear: we’ve got footage of “Sweet Child O’ Mine” below, so feel free to check it out and experience the magic for yourselves!