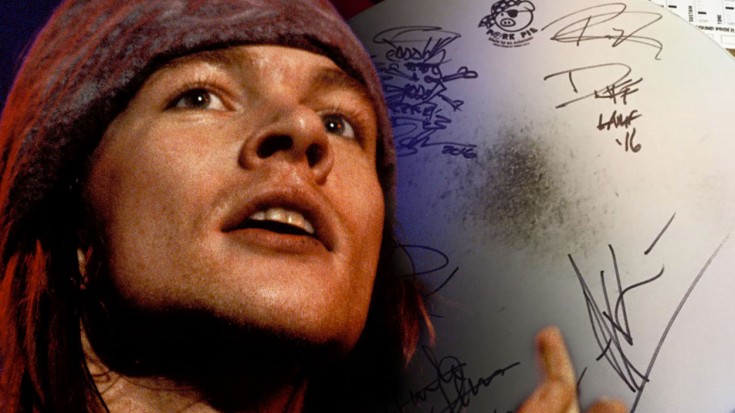 Since news of Guns N’ Roses’ impending Appetite For Destruction era reunion broke early this year, fans of the band have known that Slash and bassist Duff McKagan planned to be part of the reunion festivities – two headlining dates at Coachella and Guns N’ Roses upcoming tour – but the identities of the rest of the band behind Axl Rose has largely been kept a secret, leaving fans completely in the dark.

Until now, that is.

The biggest secret in music right now may have just been leaked, and we’d hate to be whoever has to explain to Axl why an autographed drumhead blew the lid off of his big surprise! In a photo sent to rock journalist Mitch Lafon by Sureshan Pather, the owner of the Brooklyn bars Black Swan and Beast of Bourbon, an autographed drumhead is shown bearing the signatures of Axl Rose, Slash, Duff McKagan, keyboardist Dizzy Reed, drummer Frank Ferrer and guitarist Richard Fortus, leading fans to believe that this may just be the official lineup they’ll be seeing this summer.

Check out the photo below:

If this is the final lineup, then I have a feeling Guns N’ Roses fans are in for a good time this summer and who knows? Axl and the boys may have another surprise or two up their tattooed sleeves (please, please let it be Steven Adler and/or Izzy Stradlin!) – stay tuned for more updates on the band’s highly anticipated reunion!