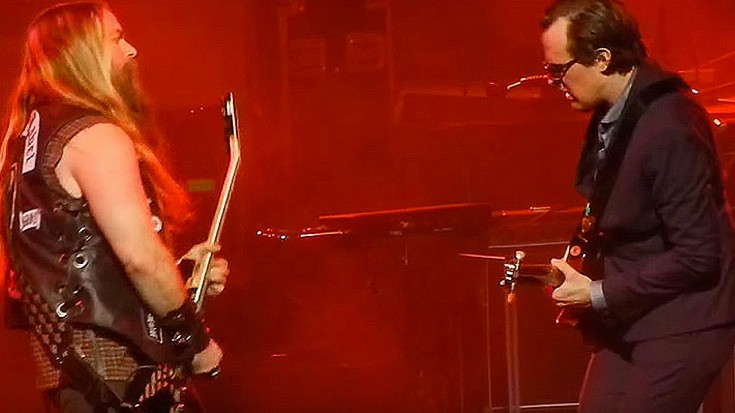 Wylde and Bonamassa Get The Cross Road Blues

Written by legendary blues guitarist Robert Johnson, “Cross Road Blues” surged in popularity when British rock legends Cream recorded their interpretation of it for their third album, Wheels on Fire. From Eric Clapton to Steve Vai, “Crossroads” as it’s become known in the last half century is a classic tackled by only the most seasoned of guitar players, and it’s always amazing to hear how different genres interpret Robert Johnson’s blues standard – including this example from two unlikely friends.

Fun Fact: The legend of blues musician Robert Johnson is an awesome one – presumably, he sold his soul to the devil in exchange for musical prowess, and died under “mysterious” circumstances at 27.

In 2013, blues legend Joe Bonamassa joined forces with Black Label Society’s Zakk Wylde for what guitar fans call a “good old fashioned head-cutting session” – a guitar duel of sorts where for nearly 7 minutes, two genres and their respective guitarists collided for an explosive head-to-head 6 stringed battle through this Cream classic. It’s everything a good guitar battle should be; neither Joe or Zakk plays the same thing twice, showing off two completely different styles of playing and two completely different sounds – and at the end, they even hug it out and congratulate each other on a job well done.

Check out the video below and let us know who you think did “Crossroads” better – Zakk Wylde or Joe Bonamassa!