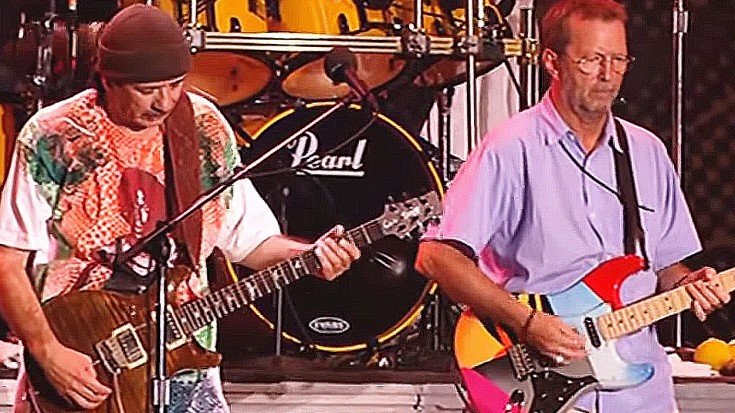 On their own, rock legends and real life guitar heroes Eric Clapton and Carlos Santana are great musicians; together, they’re absolutely unstoppable and this 2004 performance from the Crossroads Guitar Festival proves it! Held at the Cotton Bowl in Dallas, Texas over the course of two days, the Crossroads Guitar Festival featured an electrifying performance from Carlos Santana and special guest Eric Clapton that included their take on “Jin-Go-Lo-Ba,” an instrumental track originally written and recorded by Nigerian percussionist Babatunde Olatunji and made famous by Santana in 1969 and from the first shake of Santana’s maracas to count things off, it’s off to the races for these two guitar legends!

Fun Fact: Carlos Santana began playing the guitar age 8. This may have partially been due to the fact that his father was a professional violinist.

Santana’s Latin infused style of guitar playing blended with Clapton’s blues infused playing turns “Jin-Go-Lo-Ba” into the musical experience of every guitar fan’s dreams as we hear two completely different styles of music converging into one hell of an instrumental jam, stretching up to 8 minutes in length and reminding us why Clapton and Santana are still two of the most fiercely respected guitarists in rock history. There’s zero ego onstage, with Santana more than happy to give Eric room to shine and Eric returning the favor by knowing when to pull back and when to open the throttle; maybe that’s why this remains one of our favorite performances of all time and sticks out in our minds as one of the greatest moments shared between rock legends that we’ve ever seen!