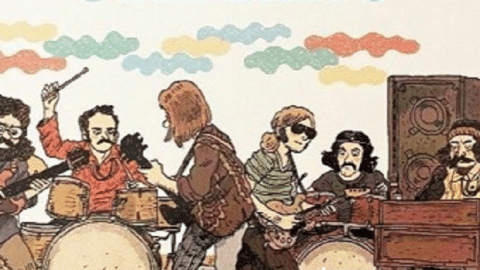 The graphic novel Grateful Dead Origins is slated for release on August 4 and now Z2 Comics has dropped a previously unreleased live version of the classic hit “St. Stephen” which will be available on vinyl and included in the deluxe edition.

The performance took place at the Fillmore West in San Francisco on August 1968. Check it out via Rolling Stone here.

Written by Chris Miskiewicz and illustrated by Noah Van Sciver, Grateful Dead Origins follows the band’s early years and their “transformation from a bar band performing as the Warlocks to becoming the creators of their own sound and forefathers for the jam-band culture.”

Grateful Dead archivist and legacy manager David Lemieux wrote in a statement, “We’ve seen so many photos and videos of the Grateful Dead in the Eighties and beyond, and even quite a bit from the Seventies. The Sixties, though, largely remain a visual mystery in terms of the band, especially the earliest days, 1965 and 1966, but also through to 1969. Grateful Dead Origins brings the band’s beginnings to life, artistically, verbally and musically.”

He added, “While Origins isn’t a discovery of primary archival documents from this era, it visually, creatively and tastefully fills in the gaps that the historical record’s archive might have missed. We’re thrilled to have worked with such a talented team to write and illustrate this early part of the Dead’s story.”

Lemieux, Miskiewicz and Van Sciver will appear on the virtual Comic Con this July 23 at 3 pm P.S.T. to discuss the graphic novel.