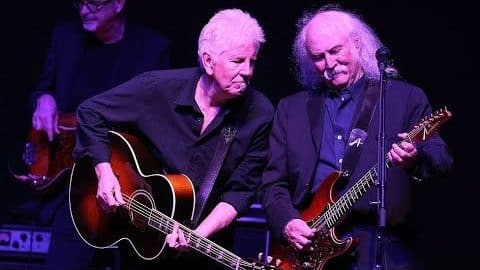 Despite the squabble with his estranged former bandmate David Crosby, Graham Nash admitted that he misses and appreciates him.

Nash is one of the four members of the Crosby, Stills, Nash & Young supergroup which disbanded in 2016. Not long ago, the singer curated a new compilation album that features him and Crosby singing into different tracks. He then gave a little overview of it by saying:

“It starts with us singing on ‘Love the One You’re With,’ then on Jackson Browne’s 1972 hit ‘Doctor My Eyes’ and James Taylor’s 1975 hit ‘Mexico.’ It finishes off with me and David singing ‘You’ve Got a Friend’ with Carole King in 1993 at the Universal Amphitheatre [in Los Angeles].”

However, choosing the last song may seem ironic as Nash and Crosby have been on bad terms since before Nash announced the end of the group. The singer continued:

“You asked me if there’s more of CSN? My answer is ‘no,’ and that’s very sad because we’re pretty good.

“But I don’t like David Crosby right now. He’s been awful to me these last two years, just fucking awful.”

He then goes on by saying, “Stephen and Neil Young, and I are great. We talk often. We don’t talk to David.” Despite that, the singer admitted:

“The truth is, I do miss David.

“I think he’s really a great musician, totally unique, and we made a lot of really good music together in our lives. But, as with brothers, sometimes you argue and that [can wreck] your relationship. That’s what happened to David and me. But look at the music we made together.”

Nash also made it clear that just because he’s working on a new compilation album, does not mean it will lead to a reunion with Crosby. He explained:

“This record has been in the works for about five years.

“I put it together, compiled it, and made a great album cover for it. I think anyone who hears it will say, ‘Holy shit, this really is a great record!'”

The compilation album does not yet have a title or release date. Meanwhile, Crosby is also busy with his own career. He has recently announced the release of his first-ever live album and accompanying concert DVD, David Crosby & the Lighthouse Band Live at the Capitol Theatre.