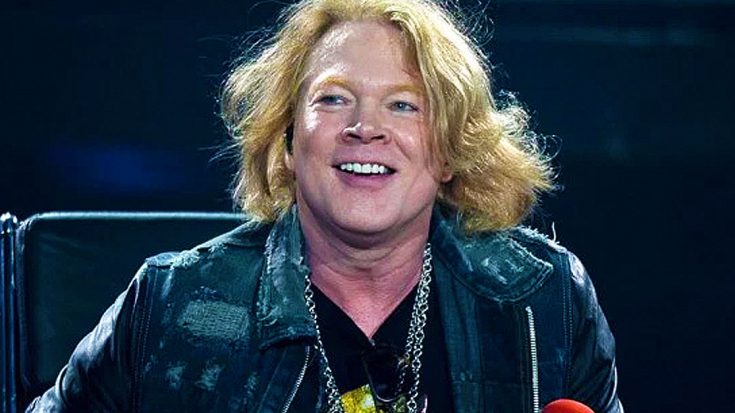 “He really wanted to make this so special for Sadie.”

Last month, we were rocked by sadness and pure rage when news broke of 18-year-old waitress Sadie Elledge’s brush with two awful customers at Jess’ Quick Lunch in Harrisonburg, Virginia; after finishing their meal, the pair left a nasty note on the tip receipt that stated, “We only tip citizens” and Sadie, who is of Honduran and Mexican descent, had no idea what she’d done to deserve that sort of treatment. In the weeks since her story went viral, Sadie’s plight caught the attention of rocker Axl Rose who for all his faults and foibles was equally outraged at the disrespect shown towards the Virginia teen when the incident was relayed to him by longtime friend and Jane the Virgin actress Greice Santo, who stepped in to offer the teen a makeover through her Glam With Greice project.

Here’s Sadie with Greice Santo just hours after she spoke with Axl:

Rose, fresh off of Guns N’ Roses’ Not This Lifetime Tour and already back on the road with AC/DC for the US leg of their Rock Or Bust tour, wanted to immediately fly Sadie and her family to AC/DC’s Fort Lauderdale show on August 30 and put them up in the best accommodations money could buy on his own dime, but a tragedy in the Elledge family prevented them from taking Axl up on his generous offer. Never fear, though – after a lengthy and uplifting phone call with Axl, Sadie and her family swill now attend AC/DC’s show at Washington’s Verizon Center on September 17 – again, all expenses paid by Axl.

Say what you want about Axl, especially in light of Izzy Stradlin’s claims that Guns N’ Roses refused to “share the loot” from their reunion tour equally – but the fact that Axl reached out to a young lady in her time of need with a tremendous act of kindness speaks volumes as to the man he’s become. Good on ya, Axl!