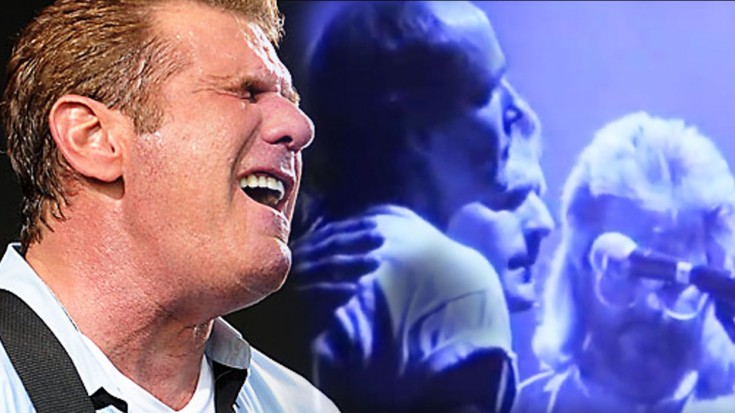 Live at the Sports and Entertainment Centre in Melbourne, AU in 1988, Glenn Frey gathered with the Little River Band to deliver a stunning and heart stopping version of “Desperado” that left not a dry in the house. At the mic with Little River Band members Graeham Goble and Wayne Nelson, Frey shares the heartfelt ballad with the men as he laces his arms around them genuinely.

Interesting Fact: Guitarist Randy Meisner claims that he came up with the guitar intro, but was not given songwriter credit, meaning he does not get royalties from it. The allocation of songwriting credits was one of many issues that caused turmoil within the band.

Written about the sacrifices that artists in the industry make when they make it big, “Desperado” was always a special song to each Eagles member, especially Frey however, as he wrote the majority of the lyrics with band member and friend, Don Henley.

Originally set to be released as a single at the time, the band decided to hold back and keep the track on their 1973 album, Desperado, with other hits like “Tequila Sunrise” and “Out Of Control.” With the subtle southern twang that Glenn brought to the lyrical masterpiece, “Desperado” became one of the group’s greatest accomplishments.

Desperado, why don’t you come to your senses?
You been out ridin’ fences for so long now
Oh, you’re a hard one
I know that you got your reasons
These things that are pleasin’ you
Can hurt you somehow

Now it seems to me, some fine things
Have been laid upon your table
But you only want the ones that you can’t get

Desperado, oh, you ain’t gettin’ no younger
Your pain and your hunger, they’re drivin’ you home
And freedom, oh freedom well, that’s just some people talkin’
Your prison is walking through this world all alone

Don’t your feet get cold in the winter time?
The sky won’t snow and the sun won’t shine
It’s hard to tell the night time from the day
You’re losin’ all your highs and lows
Ain’t it funny how the feeling goes away?