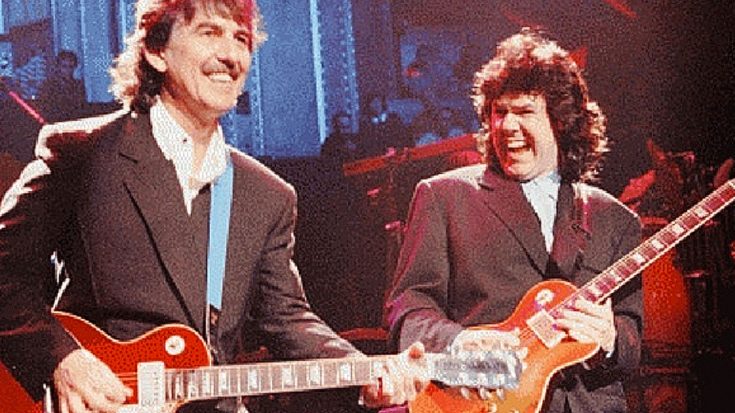 By the time the early 90s rolled around, late Beatle George Harrison had had his fill of the rockstar life; touring, live solo shows, all of it bored him immensely, ultimately touring only twice in his career as a solo artist following The Beatles’ final tour in 1966. Lucky for us, George made an exception for the April 6, 1992, benefit concert for the U.K.’s Natural Law Party at the Royal Albert Hall that saw the then 49 year old rock legend hit the stage for what was to be the final time – not including his appearance later that year at Bob Dylan’s 30th Anniversary Concert – as a solo artist before his death 9 years later, joined by former Beatles bandmate Ringo Starr and very special guest Gary Moore who George cited as his favorite guitarist, bar none.

Fun Fact: George’s only tours as a solo artist included his ’74 tour of the U.S. and his ’91 tour of Japan.

Sporting a Gibson Les Paul, George rips his way through show closer “While My Guitar Gently Weeps” with the help of Moore who, sporting an identical Gibson Les Paul, churns out an absolutely incredible guitar solo right around 5:05, bringing this night of magic and lick trading to an explosive ending. If this was to be the last time fans got a glimpse of George onstage, then we’re glad we got to see him doing what he loved with a musician he respected and admired until the end of his life!