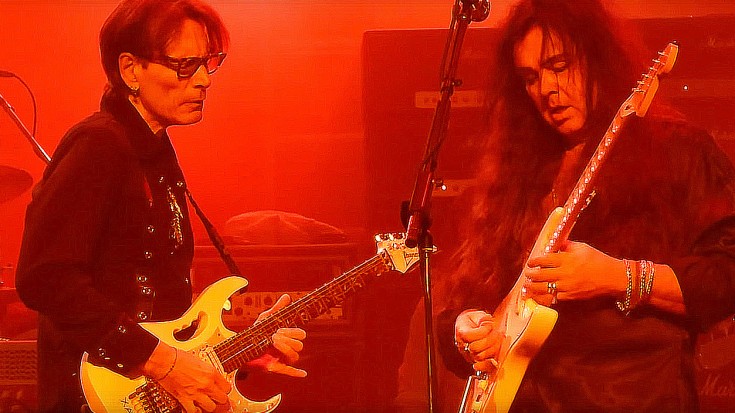 Legends Come Together For A Malmsteen Classic

Forget everything you thought you knew about supergroups – kicking off last week, The Generation Axe Tour throws it all out the window by bringing together five of the most fiercely gifted musicians to ever walk the earth for 26 nights of some of the best guitar playing the world’s ever seen! Featuring the talents of Zakk Wylde, Nuno Bettencourt, and Tosin Abasi of DC based prog metal band Animals As Leaders, The Generation Axe Tour reached a fever pitch on its opening night last week when fans were treated to a jam between old friends and legends Steve Vai and Yngwie Malmsteen, who teamed up for Malmsteen’s 1984 classic “Black Star”.

Vai calls The Generation Axe show a “unique performance of five fiercely talented guitar players coming together to create a six-string extravaganza that is sure to amaze and delight.”

Featured on Malmsteen’s debut album Rising Force, “Black Star” is the highlight of the show; we know what Steve Vai and Yngwie Malmsteen are capable of on their own, but when they’re together “Black Star” becomes an amazing equal exchange of power – both guitarists equally pushing and pulling in the right places, neither afraid to let the other shine and being fiercely proud to share a stage with someone whose talent is second to none. The real treat comes at 4:39 when Steve and Yngwie face off to see who can hold a note the longest, bringing a little friendly competition to this explosive display of musicianship from two of the world’s most celebrated musicians.

If you missed the action the first time around, never fear – relive the magic in the footage below!