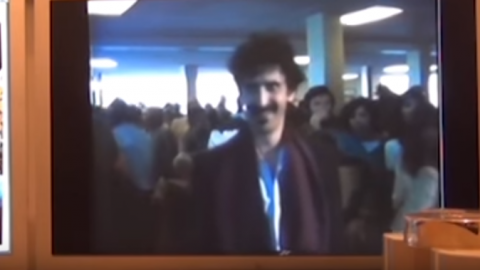 The Power Of Music

This video, recently distributed by producers of a Frank Zappa documentary, shows a US Navy Marching Band surprising the legendary musician with his very own rock opera “Joe’s Garage.” This happened way back in 1980 after Frank arrived at the San Francisco Airport. He was clearly surprised and couldn’t even stop grinning. His unguarded reaction only proved how moved he was by the performance.

It was no easy piece to play, by the way. Although Frank himself described it as a “stupid little story about how the government is going to do away with music”, it has encompassed a wide array of musical styles and has been critically acclaimed for its originality.

Joe’s Garage is noted for its use of xenochrony, a recording technique that takes guitar solos from older live recordings and overdubs them onto new studio recordings.

The reason why this never-before-seen clip was released to the public is to help in the Kickstarter campaign that they set-up to fund the said documentary. We can’t wait to see more videos!