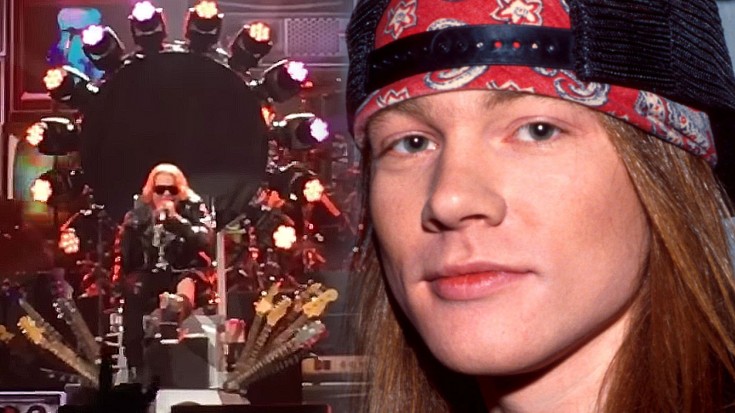 Fans of Guns N’ Roses won’t see Axl Rose’s patented snake hip dance move – at least not for the next four weeks, that is. The 54-year-old singer broke his foot during the April 1st secret show at The Troubadour in Los Angeles, undergoing surgery shortly after but thanks to an old friend and an even older Guns N’ Roses fan, Axl Rose can now tackle the next few Guns N’ Roses dates in style – and in comfort!

Just hours before the first Guns N’ Roses show was slated to kick off, Foo Fighters singer and all around rock and roll good guy Dave Grohl secretly loaned Axl Rose his throne – the same one Grohl used for the entirety of the Foo Fighters North American tour last year after he broke his leg during a show in Sweden. At first it was unknown how Axl managed to get a throne so similar to Grohl’s until the giant Foo Fighters logo was revealed.

A grateful Axl later took to Twitter to thank him for what he calls an “amazing gesture”:

HUGE THANK YOU to Dave Grohl for the use of his rock Throne! An amazing gesture!Words rn’t enough!! Makes all the difference up there!??????

Aw! With the rough blows dealt to the rock world since the year began, it’s awesome to see rockers like Dave Grohl offering up help at a moment’s notice and even cooler to see Axl Rose not only accepting the help, but publicly thanking him for such a kind gesture. We’re a little disappointed that we won’t be seeing Axl dancing for a while, but we wish the Guns N’ Roses singer a speedy recovery and the greatest tour of his career!