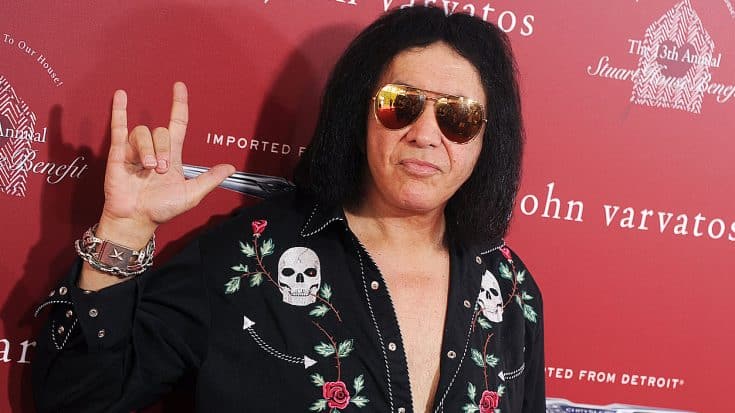 Which Story Is True!?!

Okay, well this whole thing has just gotten blown out of proportion, hasn’t it!?! Incase you’re unaware, rock legend Gene Simmons has recently filled out an application to trademark the devil-horns gesture “with the index and small fingers extended upward and the thumb extended perpendicular.” The thumb being extended perpendicular is important to remember.

Since Gene has put in this application, he has been met with all of the criticism in the world. Not just by fans, but also by prominent figures in rock music.

Nikki Sixx took to Twitter to give a playful little response…

Wendy Dio, widow of the late great Ronnie James Dio, said “To try to make money off of something like this is disgusting. It belongs to everyone. It doesn’t belong to anyone. It’s a public domain. It shouldn’t be trademarked. It’s laughable, I think, quite honestly. I think he’s made a complete fool of himself. It’s disgusting. What does he want?”

For clarification, Ronnie James Dio is one that most believe introduced the gesture.

Now’s here’s the kicker, Gene Simmons actually has two different stories on how he supposedly originated the iconic gesture.

Gene Simmons once told Classic Rock Magazine (issue 196, to be specific) that he got the gesture from Spider Man. Specifically the gesture with the perpendicular thumb extended. Again, that’s important to know.

However, in this interview here, he claims that the gesture (without the extended thumb) originated from something else…

It seems to me that Gene’s case is not so strong, then again, it’s still VERY possible that Gene’s request could get approved. Stranger things have happened. We’ll just have to wait and see!