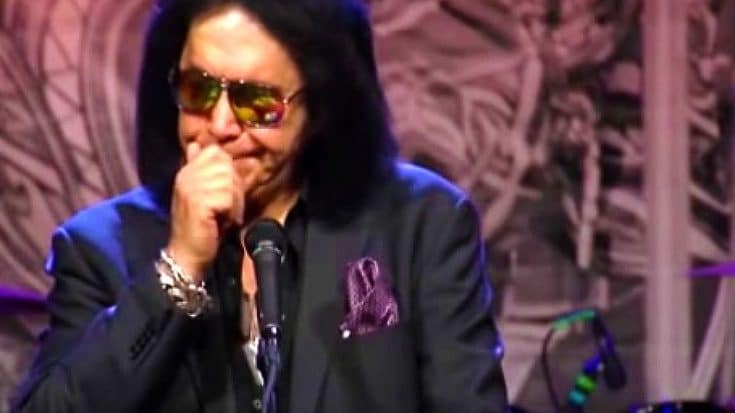 “Without Chuck Berry, I Wouldn’t Be Here.”

Three weeks after his death at the age of 90, rock and roll pioneer Chuck Berry was officially laid to rest this weekend following a loving send-off from friends and loved ones in his beloved St. Louis, Missouri. Fans turned out in droves Sunday morning to pay their final respects to the man they call the father of rock and roll, knowing exactly what to say about Chuck’s legacy and the impact he made on the lives of millions around the world with his fast, dirty, unapologetic brand of rock and roll music yet struggling with how to say it in a way that would adequately sum up his 90 years on earth with us.

Among those in attendance was KISS frontman Gene Simmons, who had not planned to speak at the event but was asked repeatedly to take the stage to share a few words about Chuck; armed with a pair of mirrored aviator sunglasses, the normally charismatic Simmons was overcome with emotion as he struggled to express the impact a black man he’d never even met had on a little boy from Israel, stopping at various points in his eulogy to compose himself and stop the tears from flowing long enough to complete his thoughts.

“Without Chuck Berry, I wouldn’t be here. When I saw that– Moonwalk, get out of here with that stuff,” he said. “When I saw that [duck walk], I went, ‘What is that?’,” drawing a few tearful laughs as he recalled jumping up and down the first time he heard Chuck’s music shortly after coming to the United States.

It’s been a hard year for the rock and roll world, one that’s forced us to face our own mortality in ways we hadn’t before. However, it’s also forced us to love our idols openly and look back lovingly at the ways they molded our lives and inspired us to break out of the box and do extraordinary things. Goodbyes are never easy, as evidenced by Gene’s tears – but wherever Chuck is, we know he’d be beyond pleased to know that the little thing that brought him the most joy brought even more joy to the rest of us.