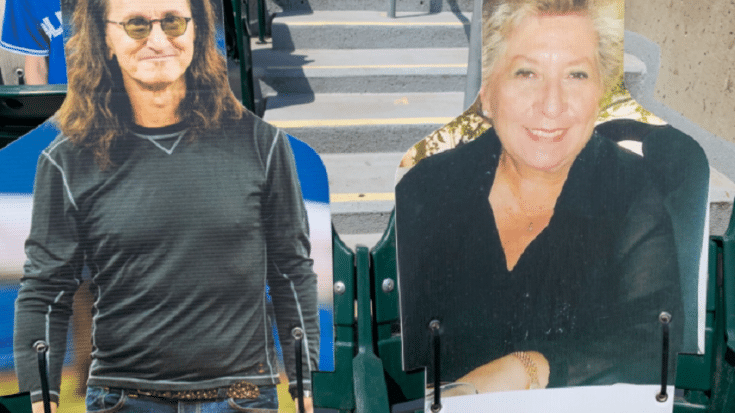 During their game at at Sahlen Field in Buffalo, New York on Tuesday night, the Toronto Blue Jays brought with them one of Canada’s rock icons – Geddy Lee. Since he very well couldn’t attend personally, the Rush frontman appeared in the form of a cardboard cutout which they placed behind the home plate and next to the “Home Plate Lady” – the woman who has been a fixture at their games for years now.

Because real fans are unable to make it to the stadiums due to the pandemic, people are getting extra creative this season. The late Pantera drummer Vinnie Paul was at a Texas Rangers game while late Metallica bassist Cliff Burton’s father Ray was at a San Francisco Giants game.

It’s no secret that Geddy Lee’s a huge baseball fan. Growing up, he rooted for the Detroit Tigers and became a fan of the Toronto Blue Jays in the ’70s. In 2013, he threw out the first pitch for their season’s home opener. He told The Metal Show, “[I’m] very happy to report I threw a beautiful curve ball for a strike… I was very nervous, I have to tell you.

The Toronto Blue Jays won over the Marlins 5-4 in extra innings.