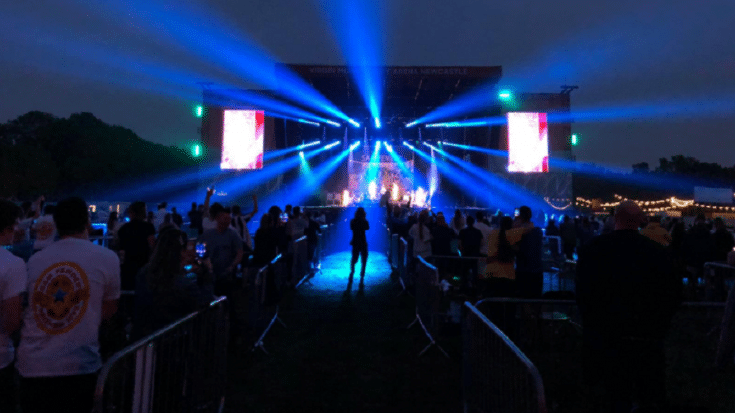 A Preview of the Future

The first socially distanced outdoor concert in UK took place on Tuesday night at the Virgin Money Unity Arena in Newcastle, England. The 2,500 attendees were spaced out into groups of five two meters apart in 500 separate elevated platforms on the racing track field. As an extra precaution, the fans were asked to don face masks and discouraged from mingling with other sections.

Because of how each platform was angled, everyone can have an unobstructed view to the stage regardless of where they were assigned. And to avoid lining up to buy food and drinks, those who attended could pre-order via the venue’s website.

The first of two sold-out shows was headlined by Sam Fender.

Fender told BBC prior to the gig, “I will miss the mosh pits but they will come. They’ll eventually come back when we’re allowed to do it again. … I think it’s fantastic that our region is going to lead the way on this, and we’ll be the trailblazers for something that will hopefully continue on through the rest of the pandemic. … It’s not going to be the same as a gig you would normally have, but we’ve got to do what we can do.”

Based on the photos, there was high compliance rate among the concertgoers. The pop-up amphitheater was created back in July and the venue promises a safe option to attend live shows amid the pandemic.

Van Morrison is set to perform at the same venue later this year.

Attendees have their own private viewing area with 6-feet of space between them.

Wow that was special! Thank you to everyone that came and made history tonight! #Goosebumps ? pic.twitter.com/qHoRjWvbZ5