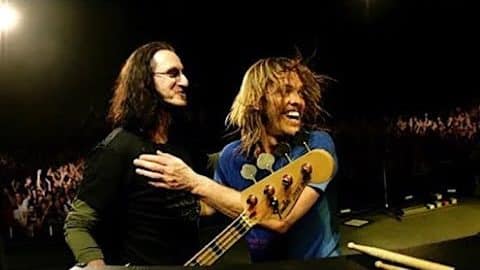 The tribute concert for the late Foo Fighters drummer, Taylor Hawkins, made several realizations, not just for the band, but also to almost everyone present at the show.

Just recently, Geddy Lee of Rush posted his comment on the tribute concert via his official Instagram account. The bassist said that it reminded him of the loss of his former bandmate Neil Peart.

Peart, the former drummer of Rush for over four decades, passed away in 2020 due to brain cancer. Peart had already retired from touring with the band in 2015 because of his health condition, which eventually resulted in the disbandment of the band saying that they didn’t want to continue without Peart.

Lee shared his thoughts and feelings about participating in the special event. He posted:

“So that happened! What a week it was in London. An incredible gathering of diverse and brilliant musicians from so many branches of the tree of rock and roll. Bonded by a single goal, to honor Taylor Hawkins. Led by the immeasurable talents and generous soul of ‘Super’ Dave Grohl, who wrapped us all in the welcoming warmth of the Foo’s and Hawkins’ family, despite the obvious pain that they are understandably still enduring.

“And for Alex and myself, it was also an important moment to reflect on the loss of our own brother Neil. Truly an experience I shall never forget. Looking forward to the LA tribute on September 27.”

The bassist was honored and thrilled to participate in the show alongside with other notable musicians. In that post, it is evident that he deeply understands and can relate to the enduring pain that the Foo Fighters members and the Hawkins family still feel.