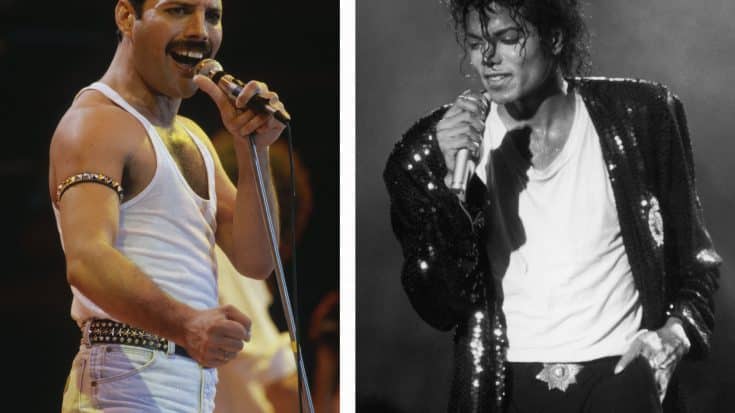 (FILE PHOTO) In this photo composite Freddie Mercury and Michael Jackson both perform on stage at the height of their fame. Queen guitarist Brian May recently revealed in an interview that he is planning on releasing three previously unheard duets between Freddie Mercury and Michael Jackson, with the help of fellow bandmate Roger Taylor and producer William Orbit. The songs, recorded in 1983, are set for release later this year.***LEFT IMAGE*** LONDON, UNITED KINGDOM - JULY 13: Singer Freddie Mercury of Queen performs during Live Aid at Wembley Stadium on 13 July 1985 in London, England. (Photo by Dave Hogan/Getty Images) ***RIGHT IMAGE*** UNSPECIFIED - 1987: American singer Michael Jackson performs on stage circa 1987. (Photo by Dave Hogan/Hulton Archive/Getty Images)

Freddie Mercury has always been in awe of Michael Jackson even before he joined Queen. It was in 1983 when they decided to collaborate on three demos – “There Must Be More to Life Than This”, “State of Shock”, and “Victory.” Mercury went to Jackson’s home studio in Encino, California to record them.

And while there were bootlegs, the demos were never completed. The first track was revised and included in Mercury’s 1985 solo album, Mr. Bad Guy. The second one became a 1984 single by the Jacksons that featured Mick Jagger. But “Victory” was left in the vault.

In one interview, Mercury revealed why their collaboration failed – because both of them were too busy. However, in another interview, he shared:

“He simply retreated into his own little world. We used to have great fun going to clubs together but now he won’t come out of his fortress and it’s very sad.”

Queen’s manager Jim Beach said that the last straw for Mercury was a llama in the studio. He said in Freddie Mercury: The Great Pretender:

“I suddenly got a call from Freddie saying, ‘Can you get on over here? Because you’ve got to come get me out of this studio.’ I said, ‘What’s the problem?’ And he said, ‘I’m recording with a llama. Michael’s bringing his pet llama into the studio everyday and I’m really not used to recording with a llama. I’ve had enough and I’d like to get out.’”

It goes without saying that Freddie Mercury was upset about it all. It would’ve been one of the greatest musical collaborations ever.