For 14 Years, Phil Collins Has Hated Paul McCartney – And He’s Finally Revealed Why 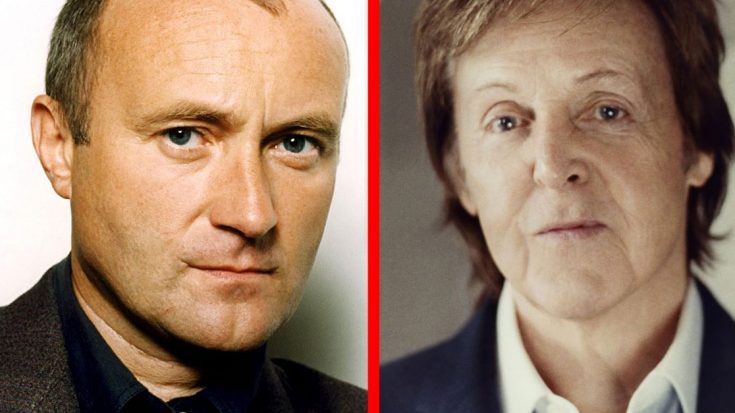 It’s been said for years that it’s never a good idea to meet your heroes. Sometimes they surprise you by being the awesome, incredible people you knew them to be but generally, they prove to be pretty disappointing and well, human. Rock legend Phil Collins learned this the hard way in 2002 when he met Paul McCartney, and now more than 14 years later cannot stand the former Beatle and has harbored a deep, deep resentment for him that until now, he’s managed to keep under wraps.

Nothing stays hidden forever though, as fans of Phil Collins learned this morning when he revealed that his intense dislike for Paul McCartney stems from their encounter at Buckingham Palace that left Paul feeling smug and Phil feeling small.

“I met him when I was working at the Buckingham Palace party back in 2002. McCartney came up with Heather Mills,” he recalled.

“I had a first edition of The Beatles by Hunter Davies, and I said, ‘Hey Paul, do you mind signing this for me?’ And he said, ‘Oh Heather, our little Phil’s a bit of a Beatles fan.’ And I thought, ‘You f—, you f—.’ Never forgot it.”

Ouch! According to Phil, who once considered Paul his hero, that wasn’t just a one off for the former Beatle who he says regularly treats people with that same brand of condescension, even those who have built a legacy of their own.

“McCartney was one of my heroes. But he has this thing when he’s talking to you,” he continued. “He makes you feel [like], ‘I know this must be hard for you, because I’m a Beatle. I’m Paul McCartney and it must be very hard for you to actually be holding a conversation with me.’”

Not cool, Paul. Not cool.