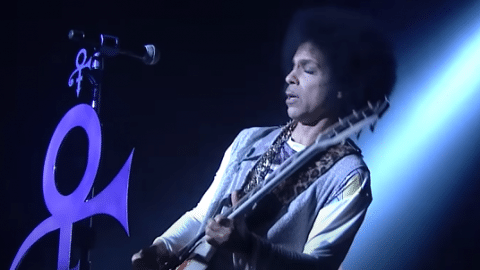 A previously unreleased footage from Prince’s final European Tour in 2014 has just been unearthed. This particular video was recorded on June 1, 2014 at Le Zénith in Paris. For 21 minutes, Prince powered through a medley that includes “Let’s Go Crazy”, “Take Me With U”, “Raspberry Beret”, “U Got the Look”, and then a mashup of Prince’s cover of Michael Jackson’s “Don’t Stop ‘Til You Get Enough” and The Time’s “Cool”.

Meanwhile, Prince’s estate has teamed up with Paris Saint-Germain FC for vinyl and clothing releases. The partnership is set to release a limited-edition 7″ vinyl which features the Prince track “Partyman” and a previously unreleased live version of “Cool” – yes, the one from his Le Zénith gig. And because it’s Prince, it’s pressed on a purple vinyl. The collaboration also includes limited-edition apparels. The club enlisted the help of Prince’s former associate Trevor Guy and the Purple One’s designers Cathy Robinson and Lori Marcuz. They’re working on a new fashion range.

Prince passed away on April 21, 2016 at the age of 57. His cause of death was accidental fentanyl overdose. He’s one of the best-selling music artists of all time with more than 150 million records sold worldwide. He also remains a pop culture icon.