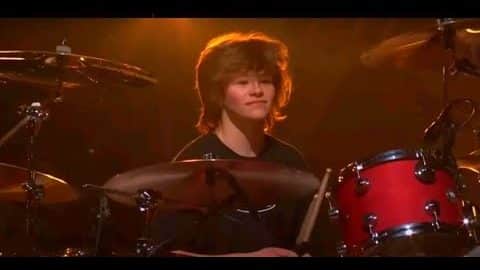 The first part of the tribute show for the late Foo Fighters drummer Taylor Hawkins has kicked off at Wembley Stadium, London on Sept. 3. Due to the number of legendary acts who performed, the event turned out to be much more of a celebration of life than a mournful affair.

But other than the biggest musicians who were included in the lineup, another Hawkins have taken the spotlight. An unforgettable moment was when Shane Hawkins, Taylor’s 16-year-old son, took his father’s chair behind the Foo Fighters and looked like a natural doing so. He led the band through a soul-stirring rendition of “My Hero.”

Shane wasn’t the only kid who got to perform onstage. Violet Grohl covered two Jeff Buckley tracks then performed “Valerie” with Mark Ronson. Nandi Bushell’s guest spot was another sweet but powerful moment. Homme’s young son running across the stage during the Vultures set, then being carried off at the end by his dad. Those kids reminded everyone that it was a family wake.

Meanwhile, the second leg of the Taylor Hawkins Tribute Concert is set to take place on September 27 at the Kia Forum in Los Angeles. Watch the video performance of Shane Hawkins below.