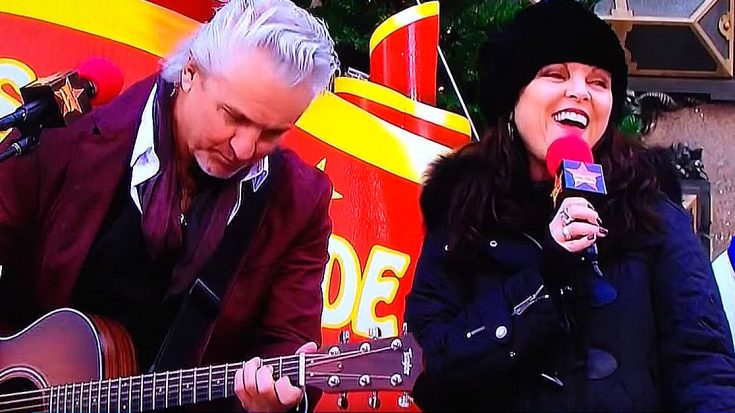 It’s Thanksgiving, which means that we get another year of our favorite time honored tradition – no, not football – the annual Macy’s Thanksgiving Day Parade! The tradition started in 1924 and has been televised since 1952, giving us three hours of tremendous floats, balloons, and yes, live performances.

2015’s Macy’s Thanksgiving Day Parade was a blast and saw rock legend Pat Benatar and her husband/musical partner Neil Giraldo teaming up and getting warm and cozy atop a Delta Airlines float designed to look like the bridge in Central Park for a debut performance of their brand new song, “One December Night” and guys, it very quickly became one of our favorites.

Fun Fact: The three-hour Macy’s event is held in New York City starting at 9:00 a.m. Eastern Standard Time on Thanksgiving Day, and has been televised nationally on NBC since 1952.

With little girls ice skating directly under them and an adorable chorus of kids decked out in blue and white singing along, Pat and Neil’s performance was enough to warm even the coldest of hearts that Thanksgiving morning and while many of us can’t agree on exactly who is taking home the rest of the leftovers, one thing I think we can all agree on is the fact that it’s just not Thanksgiving without the Macy’s Thanksgiving Day Parade and that we’re so, so glad Pat Benatar was part of such an awesome tradition!