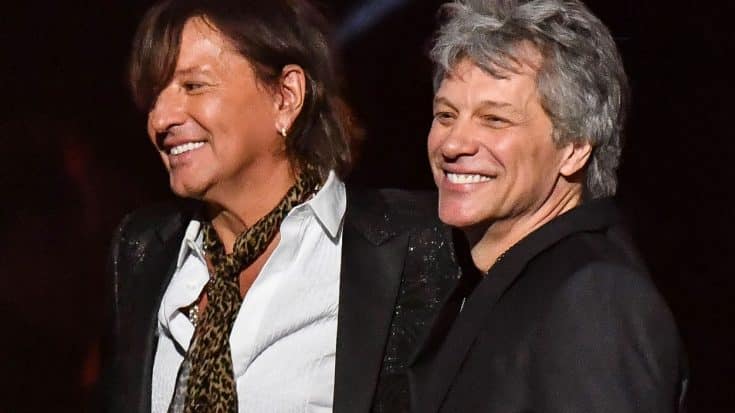 The Time Has Come!

Bon Jovi fans, the moment you’ve been waiting for is finally here.

You’ve spent the last 5 years hoping, praying, pleading – even appealing to Richie Sambora directly to rejoin Bon Jovi, if only for a little while. When Bon Jovi’s induction into the Rock and Roll Hall of Fame became not a fevered pipe dream but a concrete reality, it wasn’t the band’s long awaited induction that left you chomping at the bit; it was the possibility of a reunion with Richie. This morning, we’re pleased to say that your wish came true and y’all, it was everything you’ve been waiting for.

Saturday night saw Richie Sambora reunite with his former Bon Jovi bandmates for the first time since his shocking, sudden exit from the band five years ago. The 58-year-old rocker hit the stage not as a special guest, but as a fully fledged member of the band he helped shape as Bon Jovi graciously accepted their induction, giving way to a flood of emotion for the fans who have waited an eternity for this moment and to the band itself. If it were anyone else, the 5 years away would have made for an awkward, stiff moment onstage – but not for Richie.

He jumped headlong into the reunion, the chemistry that made him such a massive force within Bon Jovi as apparent as ever as he proudly joined hands with his friends – including former member Alec John Such, who made his long awaited return to Bon Jovi after two decades. Though Bon Jovi have flourished despite Sambora’s absence, topping the charts with their 2016 album This House Is Not For Sale and embarking on a record breaking world tour, it was clear that something special was missing from the band’s sound – something that came back Saturday night for Bon Jovi’s brilliant performances of classics “You Give Love a Bad Name,” “It’s My Life,” “When We Were Us” and “Livin’ on a Prayer.”

Sambora later recalled the moment he walked into the room, sharing a pretty sweet story about how he and his bandmates reconnected over dinner.

“There’s a lot of love here, that’s for sure. When I first walked in, we hadn’t seen each other in three years, and they go, “Does it feel awkward?” No… it doesn’t feel awkward at all,” he began. “You kind of just fall in. There’s a caste system in every band, really. Everybody has their distinct jobs that they have to do. … And one of the things I always did was try to keep everyone in the band in a happy mood. I’m that kind of guy, and I keep morale up. That’s another job that I did: keeping Jon happy, because he’s intense; he’s got a lot of stuff on his mind, and he does that to himself on purpose.”

There was certainly a lot of happiness to go around – you never realize what someone brings to a band until suddenly they return after a long time away, and the way Jon Bon Jovi positively lit up with Richie back in his orbit was worth every single day of the last five years. Knowing this and how much fun everyone had this weekend, it’s worth asking: will Richie Sambora ever rejoin Bon Jovi full time? Sambora’s got three words for fans – “Never say never.”

While it’s not in any of Sambora’s immediate plans, an interview backstage with him and Jon Bon Jovi hinted that the door is open, and they’re both game for a proper reunion.

“I think Richie has a solo career,” Bon Jovi said. As for Sambora?