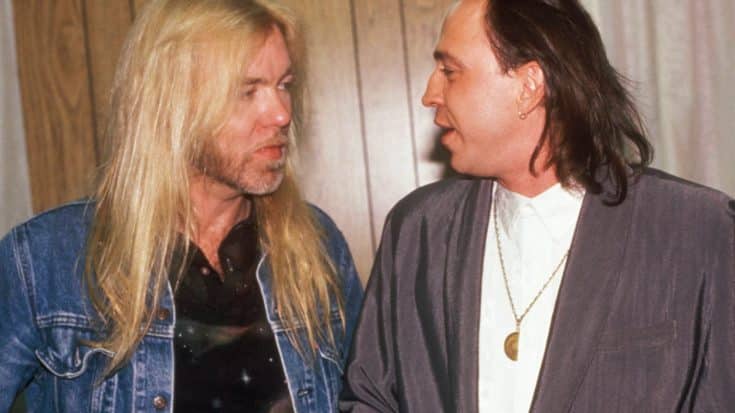 After all these years, we’re still absolutely gobsmacked by some of the collaborations that late Texas blues legend Stevie Ray Vaughan found himself in; moreover, the fact that he was a beautiful match for each artist he linked up with, dazzling everyone from Lonnie Mack to David Bowie with a playing style that was equal parts finesse and brutal force – so it’s no surprise, then, that Stevie caught the attention of another blues aficionado, late Southern rock legend Gregg Allman.

The two linked up throughout the eighties for a number of shows that to this day fans remember as being the height of entertainment we’d expect from two artists of their caliber, but the only known footage to feature Vaughan and Allman onstage together comes from the Beaver Dam Lake Music Festival in Manitoba, Canada in June of 1984; running at a lengthy 20 minutes long, the video you’re about to see starts off with interviews from Stevie and Gregg as they talk about everything from the then-present state of music and their own musical influences, to their thoughts on each other – not surprisingly, Gregg was a tremendous fan of Stevie’s guitar playing!

It’s at about 6:55 that the fun starts and we get to see an instrumental jam between Allman and Vaughan that lasts for a few minutes before the camera ultimately cuts to a 3-song solo run from Vaughan, but man…what an amazing few minutes that instrumental jam proves to be. Check it out in the video below and as always, enjoy!