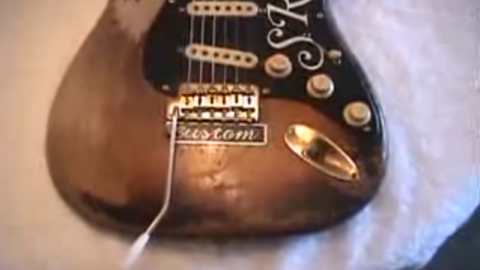 Stevie Ray Vaughan’s ‘First Wife’ is a Fender Stratocaster that was “rebuilt more times than a custom Chevy” and the guitar he mainly used throughout his entire career. It consists of a ’63 body, ’62 neck (with a fairly thick D profile) and ’59 pickups. SRV obtained the iconic piece in 1973 from the Ray Henning’s Heart of Texas Music in Austin. Rene Martinez, the just-as-famous guitar tech, tended to the maintenance, repair, and basically anything that has to be done to Number One including refretting it.

“The guitar was hard to play, and he would literally be drawing blood from the tips of his fingers. I saw some blood on the guitar one day and I said, ‘Hey, are you OK?’ And he said, ‘Aw, my tips are starting to get cut, you know.'” — Rene Martinez

In 2003, Fender released 100 Number One replica Strats (after a closely examining the original) priced at $10,000 each. For SRV fans, that was a pretty good deal.

Overall, it looks like a beautifully beat-up guitar complete with signs of wear and tear, bumps, cigarette burns and all. We bet Stevie likes it just the way it is.