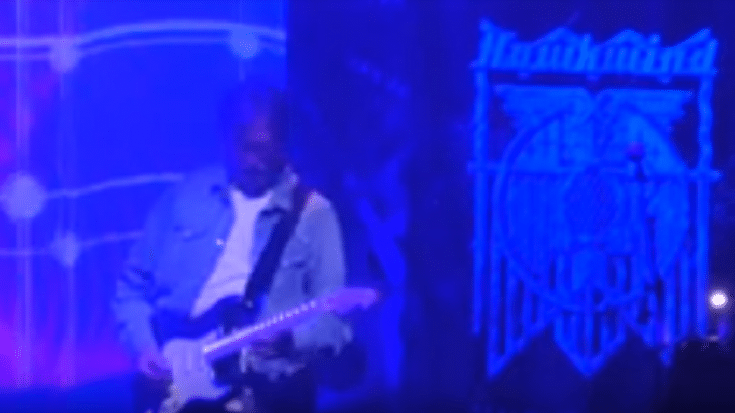 Eric Clapton teamed up with space rock group Hawkwind for the latter’s show in Guildford, England during their 50th anniversary tour. Armed with his Fender Stratoscaster, the guitar deity performed eight songs with them. He joined Hawkwind on stage during “The Watcher” and powered through seven more songs – “Hurry on Sundown,” “Silver Machine,” “Master of the Universe,” “Welcome to the Future,” “Assault and Battery,” “The Golden Void,” and “Right to Decide.”

Guitarist Dave Brock is a longtime friend of Clapton. And in a 2018 interview with Music Radar, he said: “It would’ve been about ’63 or ’64. Quite early on. We used to sit around plonking away on guitars. We used to hang out in Richmond because it was a really nice place, and go down Eel Pie Island and meet up in L’Auberge coffee bar. Eric lived in Cobham in Surrey, which isn’t far from there. That’s where everybody used to hang out. We used to sit there and play guitar and swap around – each one of us would have a go.”

Brock also told The Yorkshire Post, “I’ve known Eric for years. In fact, the guy who was writing his biography got in touch with our management and we got in contact with Eric and he played on this new version of The Watcher.”