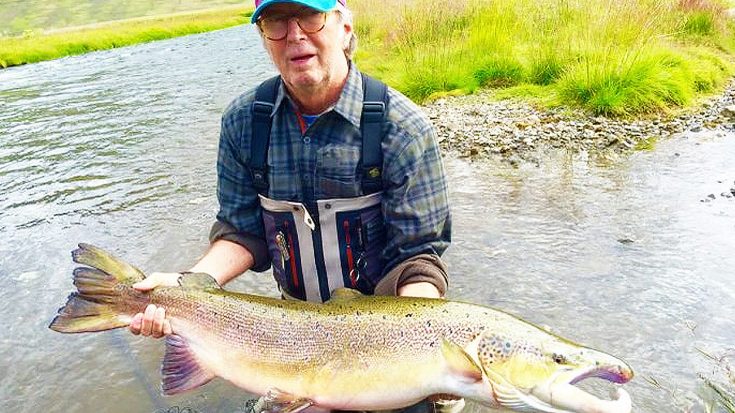 Catch of the year!

In his career, Eric Clapton has been regarded as one of the best guitarists of all time. Unfortunately, Clapton has had to recently slow down his guitar playing due to nerve damages in his fingers. But, this hasn’t stopped Clapton from other activities to keep himself occupied. This past week, Clapton went fishing in Iceland. On his fishing trip Clapton caught a 28 pound salmon, which set the record for the largest salmon caught this year! The fish was a whopping 42.5 inches long, and Clapton worked with an expert guide to help him navigate the river and hunt down fish.

It was reported that the salmon put up a great fight against the rock legend. Clapton spent two and a half hours fighting the fish before he finally was able to reel him in. The fish also made Clapton travel a half mile down the river. Since there is a strict catch and release policy where Clapton was fishing, the guitarist couldn’t enjoy a nice salmon dinner that night. But, he was able to snap a quick picture with the fish before unhooking him and releasing him back into the wild. It’s pretty awesome to see Clapton spending his leisure time doing something he loves. Hopefully he can pick a guitar back up soon, though!

Check out the video of Clapton performing at his 70th birthday down below!