10 Late Rockstars We Want To See Resurrected As Holograms | See Who’s Slated To Be Next! 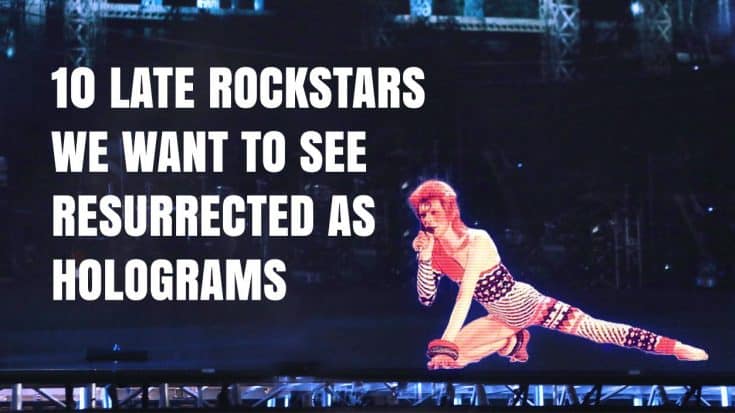 The Pride & Joy In Our Hearts

Stevie Ray Vaughan is one if the most beloved and revered singer/guitarists even 26 years after his death. To this day, his playing and singing are still as wildly influential as ever. Ever since the news broke that Ronnie James Dio had been resurrected in Hologram form, we now know that there are endless possibilities to who we can bring back to life to see play again even after death. Stevie Ray Vaughan‘s place on this list was a no brainer. He was one of the most charismatically amazing frontmen in the entire world of music. His playing and singing are already a treat to hear on a record, but just imagine what it’d be like to it one more time live! Something you’ll see throughout this list are petitionary requests to get these amazing rock stars in hologram form!

To make it short and sweet, Joey Ramone and his band The Ramones pretty much revolutionized punk rock. They were a catalyst in the movement of sheer rebellion and the popular movement on punk rock overall. Joey Ramone was quickly regarded as one of the most charismatic and influential frontmen of the punk rock era. His premature death was truly just one of the most devastating pieces of news that was ever released and definitely put the punk rock scene in ultimate shock. Again, this is intended to be a petitionary movement to get this man in hologram form! For that matter, get all of The Ramones in hologram form!

When Ace Of Spades was first played by Motörhead, the hard rock/metal world was sent into a frenzy. Not only was the song simply phenomenal, it also gave frontman Lemmy Kilmister the iconic persona/image that he would proudly wear the next 30+years. Lemmy Kilmister was a rare breed of rock icon. He was one of VERY few rockstars who could drink and smoke that much without becoming a babbling drunk. It’s actually really impressive. Nevertheless, he went on to be one of the most influential figures in heavy metal of all time. The badass persona that he dawned was one that only he and he alone could truly use. So it’s a given that he should be amongst those who deserve a hologram.

With A Lightening Bolt Across His Face!

One of the more recent examples of a rockstar passing too soon, David Bowie was arguably the most flamboyantly inspirational figures in music. His charisma, on stage presence, and unique personality quickly asserted him as a mega star in all of pop culture. Us demanding for David Bowie to be brought back in hologram form kinda speaks for itself. After all, he is MOST known for his live showmanship. This should be an easy sell to whoever it is that creates these holograms. Plus, you can’t tell me that it wouldn’t sell tickets like crazy! He sold out shows even before he was signed. This is a no brainer!

A Freebird Once Again!

October 20th, 1977. It is still regarded as one of the most tragic days in music history. It was the day of the plane crash that killed Lynyrd Skynyrd’s lead singer Ronnie Van Zant. His charisma and swagger quickly made him a music icon and cemented him as one of the most important people in all of southern rock. It’s nothing new to pine for the days when Ronnie Van Zant was alive and kicking. He has given us some of the most timeless anthems such as Sweet Home Alabama and Freebird just to name a couple. So you can bet that a hologram Ronnie Van Zant would be a hot commodity. Plus we’re sure that Lynyrd Skynyrd would be more than open to this idea. After all, this video here has gotta be proof of something regarding that!

On The Highway Back To The Stage!

Still considered to be the innovator of AC/DC‘s signature sound and machismo (I have an irrational fear of using that word), the former frontman named Bon Scott is still beloved and missed the music scene abroad. As soon as the news of Bon Scott‘s death hit, the rock scene was sent into a synchronized crying episode as his death was regarded as one of the most shocking to ever have happened in classic rock. He may not be with us any longer, but his singing and natural showmanship will live on for years and years to come. That being said, it’d be a lot easier to make sure he lives through… (you guessed it) a Bon Scott hologram!

Someone Come Light His Fire!

When thinking of late frontmen who ultimately changed the game in being a frontman, there are a few names that come to mind, but there’s one that really sticks out for obvious reasons. His name is Jim Morrison. He was the kind of frontman that became on of the most controversially awesome singers of all time. His sexualized dancing and pure stage presence made it so that whether you liked him or didn’t you couldn’t look away. Nowadays, he is easily one of the most beloved remembered figures in rock music. Given his VERY premature death, a hologram version of Jim Morrison is ABSOLUTELY necessary. MAKE IT HAPPEN!!

John Lennon aka member of The Beatles aka revolutionary solo artist aka one of the most important activism figures of the last 50 years had a tragic premature death that shook the world to its core. If John Lennon were around today, he would still be making phenomenal music and changing the game. It’s not so much that he was an amazing frontman, but more so that him JUST BEING him is enough to warrant a demand for his to become a hologram. It seems pretty obvious. Just think of the headlines! “John Lennon is alive again!”. Tell me that’s not news worthy! Go ahead, tell me!

A Beloved Godess Of Music!

What more is there to say? Janis Joplin is STILL regarded as one of the most charismatically influential women in music decades after her tragically premature passing. She is probably one of the most lovable people on planet damn earth, plus she she was at the forefront of the Flower Power Movement. It only makes sense that she should be made into a hologram. After all, people eagerly pine for the days that Janis Joplin was alive. Her music says it all, but what says even more is her live stage presence.

When you think of Freddie Mercury, you really should think “rockstar who had it all”. The look, the talent, the voice, and the stage presence. Freddie Mercury was ultimately declared one of the best singer/songwriter/frontmen in the ENTIRE world. He had certain spark to him like no other. He was and always will be one of the greatest. The reason he is #1 on this list is because he probably has the most to offer as a live performer. His natural charisma, his dancing, his confidence, his flamboyance, you name it! Freddie Mercury is a legend. So to whom it may concern regarding these holograms. GET THIS MAN INTO A HOLOGRAM! That is all.