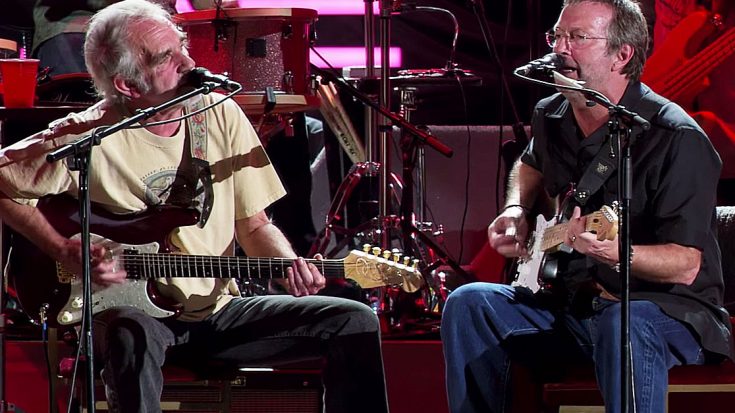 In his 71 years on earth, Eric Clapton’s achieved enough to send any man to his grave happy and fulfilled. He’s been in 3 of the most influential rock bands of the 20th century, he married the woman of his dreams after snagging her from a former Beatle and Clapton’s solo career has been one that can only be described as “glowing” – but as of 2007 there was still one thing missing from his already impressive resume and fans that summer got to see him fill it in when he hit the road with his friend and mentor JJ Cale.

Touring in support of their 2006 collaboration Road To Escondido, Clapton and Cale’s coast to coast romp saw the pair hit San Diego where joined by Doyle Bramhall II and Derek Trucks, their 16-song set was capped off by a performance of Cale’s 1974 classic “Anyway The Wind Blows” that featured Clapton and Cale trading verbal lick after verbal lick, punctuating each verse with plucky, sharp guitar playing highlighted by the twin guitar action of Bramhall and Trucks, making for nearly 6 minutes of magic spun by some of the guitar world’s best and brightest.

“This is the realization of what may have been my last ambition: to work with the man whose music has inspired me for as long as I can remember,” said Clapton in 2006.

One of several performances featured on Clapton’s recently announced live album Live In San Diego, “Anyway The Wind Blows” perfectly sums up the magic that happened when teacher met student in the form of a Clapton/Cale collaboration. If you weren’t able to see this electrifying pair during their 2007 tour, never fear – the moment was captured in the video below and you can also grab your copy of Live In San Diego on September 30th!