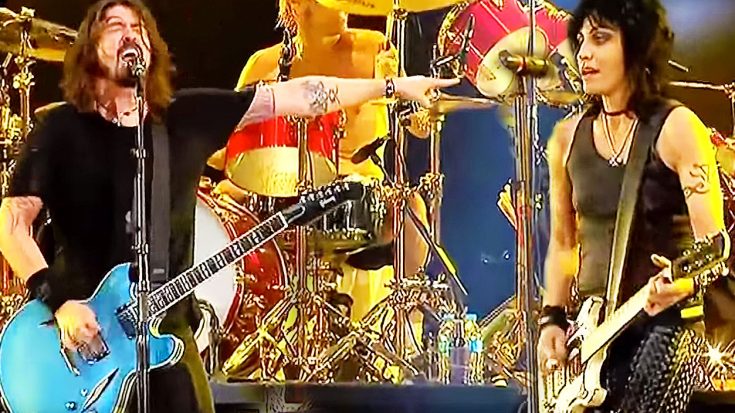 One thing we can all appreciate about Dave Grohl of the Foo Fighters, it’s that he always appreciates and recognizes the greats that have paved the way for him as a musician. During a concert in 2013, Dave and the Foo’s brought Rock & Roll Hall Of Fame legend Joan Jett on stage to play her hits “Bad Reputation” and “I Love Rock and Roll.” Dave and the Foos take a back seat to Joan, and let her shine in the performance. Joan has her old school guitar, and still shows that she can bring it, even at the age of 54!

As Dave is introducing her, he has some wonderful words for her. He claims that Joan “changed rock and roll forever,” and “made it okay to be dirty.” Joan was the musician who inspired Foo Fighter guitarist Pat Smear to start his first band The Germs. Overall, this was one of the performances of the ages, and a huge homage to an absolute legend.

Check out the performance down below, but be warned, Dave’s vocabulary consists of a ton of F-words! LOL!