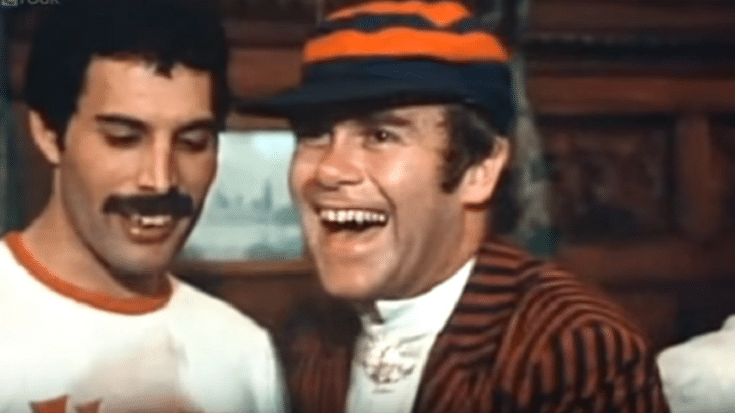 In a recent interview with Guardian, Elton John was asked about his favorite memory of Freddie Mercury and he recalled the time they spent backstage during the iconic Live Aid concerts in 1985. He said, “Backstage at Live Aid, I had a huge area that I kind of decorated. I made sure there were seats for everyone, so that people who were playing could sit down and have a natter. Freddie came over after Queen had stolen the show. I said, “Freddie, nobody should go on after you – you were magnificent.” He said: “You’re absolutely right, darling, we were – we killed them.””

Elton continued, “He was so excited. Then he said, “You, on the other hand, dear – you looked like the fucking Queen Mother when you were on stage. Where did you get that absolutely awful hat?” That was very Freddie. He was hilarious. Even when he was dying, he was exactly the same. He was lying in bed, too weak to stand, losing his sight, going: “Have you heard Mrs Bowie’s new album, darling? What does she think she’s doing?” I always had the best time with him.”

In the same interview, he also revealed why he has never worked on writing a sports anthem and it has something to do with Queen’s epic masterpiece We Are The Champions. He said, “To be honest, We Are The Champions can’t be beaten: it’s so good at what it does, any sport can use it. Queen had that market sewn up, which was hysterical, because Freddie Mercury hated sport; he knew nothing about it at all. If you’d mentioned Arsenal to Freddie, he’d have thought it was something to do with gay sex.”

Earlier this year, Rod Stewart revealed that along with Freddie Mercury and Elton John, they once discussed the possibility of forming a supergroup and calling it Nose, Teeth & Hair. Imagine if that actually happened.